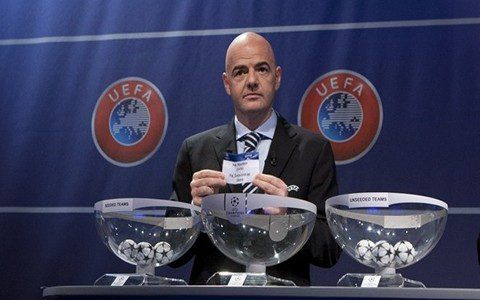 The draws for the semi-finals of the 2013/14 UEFA Champions League and UEFA Europa League will take place on Friday 11 April at the House of European Football in Nyon, Switzerland.

Both draws will be carried out in one session, beginning at 12.00CET. They will be conducted by UEFA General Secretary Gianni Infantino, assisted by UEFA Europa League final ambassador Ciro Ferrara and the ambassador for the UEFA Champions League final, Lu?s Figo.

Proceedings will start with an open draw for the?UEFA Europa League?semi-finals. As with the quarter-finals, no teams are seeded and sides from the same national association may be pitted against each other. The semi-finals are played on a home-and-away basis, with the first legs on Thursday 24 April and the return legs the following Thursday. For administrative purposes, the last step of the draw will define whether the winner of semi-final 1 or the winner of semi-final 2 will be considered the ‘home’ team for the final at the Juventus Stadium in Turin on Wednesday 14 May (20.45CET).

Media representatives wishing to attend the draws are requested to apply via email to?fame_accreditations@uefa.ch?before 12.00CET on Thursday 10 April, mentioning ‘Club draws’ in the subject line. A live feed from the draw will be available in the media working area which is equipped with Wi-Fi.

Both draws will be broadcast live on UEFA.com and on Eurosport.

Media wanting to attend these matches should email?fame_accreditations@uefa.ch?by 12.00CET on 8 April, writing ‘UEFA Youth League’ in the subject header.

Non-rights holders are advised they will not be permitted to film during the games. However, they will have access to post-match activities provided they have been granted accreditation. Eurosport will broadcast all games live.