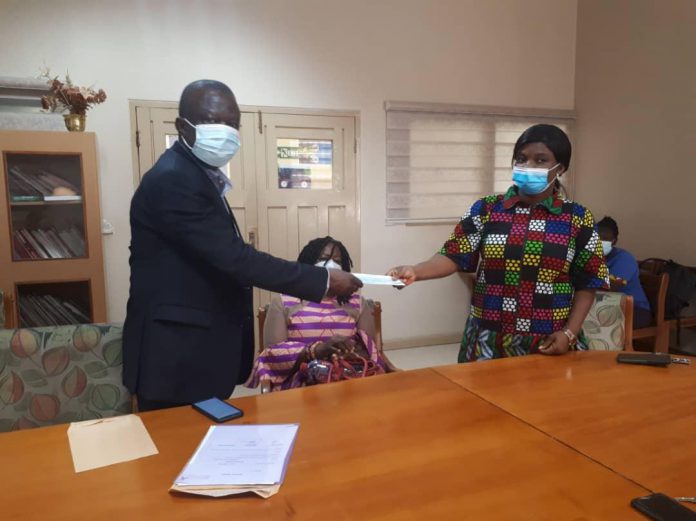 The Sena Anku Memorial Foundation (SENAMF) on Friday presented a cheque for GHS10,000 to the National Centre for Radiotherapy and Nuclear Medicine at the Korle-bu Teaching Hospital to support the treatment of two cancer patients.

The Foundation further pledged to offer additional financial support to the two needy patients until they recovered fully.

Mr Benjamin Anim, the Chairman of the Foundation, who presented the cheque, said the donation was in commemoration of the 10th Anniversary of the passing of Sylvia Sena Anku, who died at age 29, and nine years since the establishment of the Foundation.

He said Sena passed on after battling with complications of breast cancer, and on her sick bed, promised to give financial support to needy cancer patients if she survived.

“However, according to the wisdom and will of God, her wish failed to see the light of day,” Mr Anim said.

The SENAMF, he said, was, therefore, founded to bring into realisation Sena’s wishes and to keep her memory as a beautiful soul and personality who once lived on earth.

It had since supported about eleven needy cancer patients to under-go treatment at Korle-Bu.
Mr Anim said the Foundation had, since its formation, been instrumental in working with other like-minded institutions to provide public screening to ensure early detection, as treatment outcomes were positive if the disease was diagnosed early.
“We also do a lot of youth engagements, and outreach programmes with secondary schools and churches, to provide basic education and information on breast and other forms of cancers, considering the fact that the disease is currently afflicting very young women as it did in the case of Sena, hence the need to intensify awareness among this group of people,” he said.

Mr Anim said the Board of SENAMF was appealing to all well-meaning individuals to join hands with the Foundation and donate towards the worthy cause to help save more lives.

He said donations could be sent to the SENAMF account number: 9040000679199 with the Stanbic Bank Ghana Limited, Accra main branch.

Ms Naomi Oyoe Ohene Oti, an Oncology Nurse Specialist and Head of Nursing at the National Centre for Radiotherapy and Nuclear Medicine, commended the Foundation for the humanitarian gesture and it would go a long way to support the treatment of the two beneficiaries.

She said the mobilisation of additional funding was very critical to helping patients to fully complete their treatment procedures.

Ms Ohene Oti said because of the expensive nature of cancer treatment, most patients often abandoned their session midway and reappeared in the Hospital only when their situations had deteriorated beyond any intervention.

That often led to high mortality, she said, and appealed to private sector institutions and individuals to support the Centre to care for the growing number of needy patients.