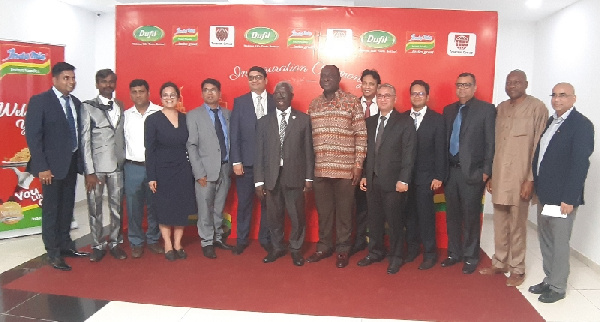 Mr Yaw Osafo-Maafo, Senior Minister, has commissioned a 20 million dollar state of the art factory for De United Foods Industries Limited (Dufil), producers of “Indomie” noodles under the One District One Factory (1D1F).

He said the idea of producing the needs of the country locally was very much in line with government’s vision of transforming the economy from extraction and export of raw materials to an industrialized economy anchored on value-addition.

The Senior Minster said it would be difficult to achieve proper results of other policies without macroeconomic stability indicating that no company would survive in an unstable economy where inflation was rising.

He commended the company for taking advantage of the IDIF policy to invest into their operations in Ghana, encouraging management to consider establishing another manufacturing facility in the northern sector of Ghana in order to take advantage of the African Continental Free Trade Area (AfCFTA) which would be fully operational from July this year.

Mr Alan Kyerematen, Minister of Trade and Industry, on his part, said the opening of the factory would help the country save foreign exchange explaining that prior to the establishment of the factory, the company imported the noodles.

Mr Kyerematen added that private capital was the way to go as a country as according to him, through the establishment of such investments, the country would benefit from technology and innovation which was an integral part of industrialization.

Mr Ishmael Ashitey, Greater Accra Regional Minister, entreated management of the company to improve working condition for staff because satisfied employees were more productive and also urged the staff to give off their best.

Mr Mahesh Shah, Managing Director for Dufil Ghana, in a welcoming address, said indomie had become a household name which was evident in the over 250 million packs sold by his outfit in 2019.