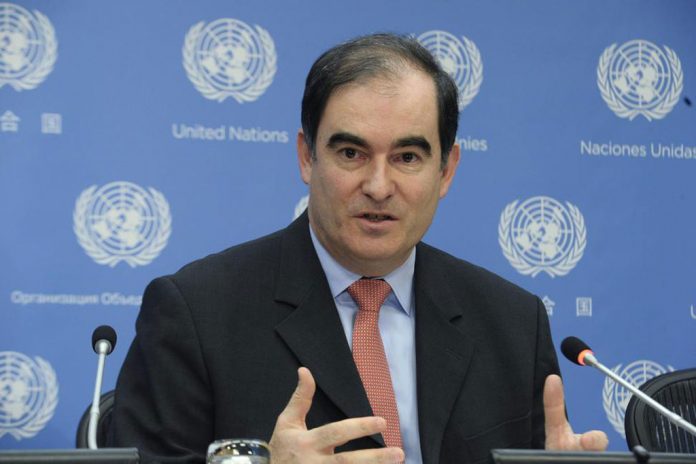 Speaking to media in New York following a three-day mission to Eritrea the Director of Operations for the Office for the Coordination of Humanitarian Affairs (OCHA), John Ging, today highlighted the important progress that has been made in Eritrea over the last several years.

Drawing attention to the often overlooked situation in Eritrea, one of the youngest nations in Africa, OCHA’s Director of Operations highlighted some of the country’s positive achievements since engaging more openly with the international community, noting the completion of a first four-year development-based Strategic Partnership Cooperation Framework (SPCF) for 2013-2016 which contributed to significant progress on a number of Millennium Development Goals, most notably in the health sector. More recently, the Government and the UN have signed a five-year Cooperation Framework (2017-2021) which includes expanded UN activities on youth, migration, gender and human rights. “Eritrea has enormous potential for growth in economic opportunities for its young people, and by consequence to contribute to greater stability in the region,” said Mr. Ging.

Mr Ging also spoke about the urgency and challenges in acceleration of the positive momentum. The nutrition situation for children under 5 is concerning and acute malnutrition remains a major challenge. Water and sanitation practices remain sub-optimal and less than half of the rural population have access to safe drinking water. The food security situation in Eritrea is also precarious. Located in the arid Horn of Africa region, the country is susceptible to recurrent droughts and most recently the impact of El Niño.

Mr. Ging visited Serejeka sub-zone in Maekel region with the Minister of Health, a representative from the Ministry of Foreign Affairs and UN colleagues based in the country. The delegation visited two health centres with nutrition programmes, and a programme designed to give young Eritreans skills training. The delegation witnessed well-implemented and high quality programs jointly implemented by the Government of the State of Eritrea (GoSE) and the UN, which have resulted in tangible improvements in the lives of vulnerable people. As a result of these projects, there has been an increase in vaccination coverage for children under 5 years of age. Up to 95 percent of children in the area around the health centres visited were vaccinated.

“The spirit and resilience of the Eritrean people is impressive,” Mr. Ging said. “After speaking with the community members in Serejeka, living around the health centre we visited, it’s clear that the success of these nutrition programmes are deeply reliant on community members supporting one another. One local dairy farmer is providing fresh free milk to support the nutritional status of new mothers and encourage them to deliver their babies in the local health centre where there is critical support. It is an inspiring side of Eritrea. – the kind of local partnerships that we as the international community must continue to actively support.”

In meetings with the Government officials, notably Ministers of Information, National Development, Health, Education Agriculture and Labour and Human Welfare, Mr. Ging recognized the progress by the GoSE in its work with the UN to address Eritrea’s humanitarian and development challenges and focused on opportunities to accelerate the pace of the progress.

In closing, Mr. Ging called on the international community to increase the engagement with Eritrea and support funding for the SPCF 2017-2021 which requires US$329 million over five years, including for basic services such as  food security, nutrition, health, WASH, child protection, education and a multi-sector response to refugees He said that Eritrea should be a focus for the UN’s prevention agenda as strengthening engagement is the only path to development, stability and prevention of future humanitarian crisis. “The situation of Eritrea is a reminder for all of us of the UN’s indispensable value where we see the positive and practical impact of the UN’s work,” Mr. Ging said.