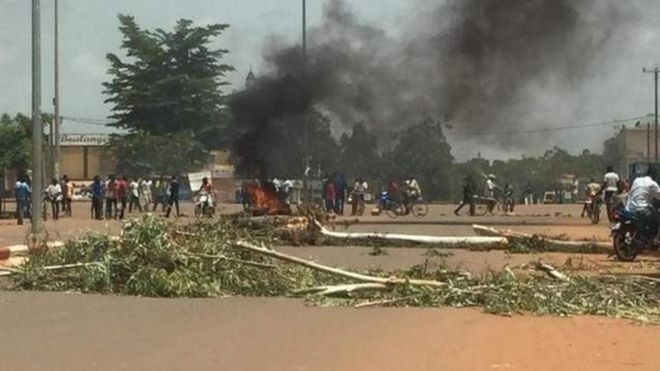 OUAGADOUGOU — Two dead bodies have been found in Ouagadougou streets following protests that broke out after the seizure of power by soldiers loyal to Burkina Faso’s ex-President Blaise Compaore.

The first dead body was found on Wednesday evening at a time when protesters were trying to head towards the presidential palace where the transition president and members of his government were being held hostage by the presidential guard officers. (Burkina Faso-Protest)
– – – –
KINHASA — Military operations aimed at eliminating armed groups have resulted in the rescue of 1,411 children from armed groups in the east of the Democratic Republic of Congo (DR Congo), the spokesman for the UN mission in the country (MONUSCO) Felix Prospere Basse said Wednesday.
Basse said the children who included 1,339 boys and 72 girls, were rescued between January and September 2015 from armed groups in Katanga, North Kivu, South Kivu and Orientale provinces. (DR Congo-Children)
– – – –
ABUJA — At least 20 people were killed and 30 houses razed in a fresh attack by gunmen who stormed a local community in Nigeria’s central state of Plateau, residents said Thursday.
Scores of people were also injured in the attack on Tuesday, said locals in Kadunung community, alleging that the attackers came from a nearby Barkin Ladi district of the state. (Nigeria-Attack)
– – – –
MOGADISHU — At least four Somali soldiers were killed and 10 others were injured in an explosion inside a military base in Kismayo town, southern Somalia, military officials said on Thursday.
Senior Military officer Abukar Yacqub told Xinhua that at least four soldiers died and 10 others wounded, adding that the soldiers were in the queue for payment of salaries. (Somali-Explosion)
– – – –
BRUSSELS — Leaders of the European Union (EU) have been summoned to hold an extraordinary summit next Wednesday to discuss solutions to the ongoing refugee crisis, European Council President Donald Tusk said in a tweet on Thursday.
Earlier on Thursday, the European Parliament voted in support of the mandatory emergency relocation of 120,000 refugees in clear need of international protection. (EU-Refugee) Enditem