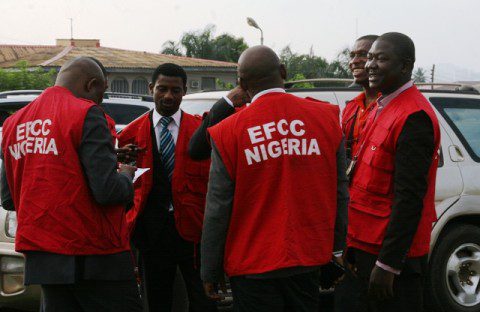 Socio-Economic Rights and Accountability Project, (SERAP) has urged President Muhammadu Buhari to “urgently refer the allegations of mismanagement of $16 billion power projects between 1999 and 2007 to the Economic and Financial Crimes Commission (EFCC) and the Independent Corrupt Practices and Other Related Offences Commission (ICPC) for further investigation, and if there is relevant and sufficient admissible evidence, for anyone suspected to be involved to face prosecution.”

The organization also urged Buhari to “refer to the EFCC and ICPC not just allegations regarding the $16 billion power projects but also the alleged squandering of over N11 trillion meant to provide regular electricity supply covering the governments of former presidents Olusegun Obasanjo, Umaru Musa Yar’Adua and Goodluck Jonathan.”

Buhari had on Tuesday accused Obasanjo of spending $16bn on power projects during his tenure as the President without corresponding power supply to Nigerians. But responding, Obasanjo said the President’s allegation was rooted in ignorance, claiming he was already cleared of any wrongdoing concerning the power sector by the National Assembly, and referring Buhari to his autobiography, My Watch, which he said reproduced various reports on the matter.

But SERAP in a statement by its executive director Adetokunbo Mumuni said, “We welcome the focus by President Buhari on the massive allegations of corruption and mismanagement in the power sector and urge him to expand his searchlight beyond the Obasanjo government by ensuring accountability and full recovery of the over N11 trillion squandered by the three administrations. It is only by pursuing all the allegations and taking the evidence before the court that the truth will be revealed and justice best served. This is the only way to conclusively address the systemic corruption in the power sector and an entrenched culture of impunity of perpetrators.”

The organization said, “Addressing impunity in the power sector should be total. This would help improve the integrity of government and public confidence and trust in their government. It would also serve as a vehicle to further the public’s perception of fairness and thoroughness, and to avert any appearance of political considerations in the whole exercise.”

According to the organization, “By immediately pursuing justice and recovery of any stolen assets in the power sector, the Buhari government would be acting in the public interest, and consistent with the spirit and letter of the constitution, particularly Chapter 2 of the 1999 Constitution dealing with Fundamental Objectives and Directive Principles of State Policy, and providing that high-level public officials have a clear obligation to “eradicate all corrupt practices and abuse of power.”

The statement read in part: “SERAP notes that lack of access to uninterrupted energy/electricity services has forced many citizens to use and collect frequently contaminated surface water for drinking and household uses; and denied the citizens the ability and services for boiling, purifying, disinfecting, and storing water, as well as for irrigation to increase the productivity of lands, thereby decreasing the availability of food supplies and undermining employment opportunities.”

“SERAP notes that the failure by successive governments to tell Nigerians the truth about allegations of corruption in the spending of not just the $16 billion but also the over N11 trillion spent by three governments on electricity supply amounts to a failure to ensure that energy services/electricity services are progressively made available, on the basis of equality and non-discrimination, to the whole population, including those most disadvantaged, such as the fringe dwellers and the rural poor.”

“SERAP in 2016 sent a petition to the then Acting Chief Justice of Nigeria Justice Water Samuel Nkanu Onnoghen. Last year SERAP published a report From Darkness to Darkness: How Nigerians are Paying the Price for Corruption in the Electricity Sector. The report showed how the country has lost more megawatts in the post-privatisation era due to corruption, impunity, among other social challenges reflected in the report.”

“The report also shows that “The much-publicised power sector reforms in Nigeria under the Electric Power Sector Reform Act of 2005 is yet to yield desired and/or anticipated fruits largely due to corruption and impunity of perpetrators, regulatory lapses and policy inconsistencies. Ordinary Nigerians continue to pay the price for corruption in the electricity sector–staying in darkness, but still made to pay crazy electricity bills.”

“The report accuses Dr. Ransom Owan-led board of the Nigerian Electricity Regulatory Commission (NERC) of allegedly settling officials with millions of Naira as severance packages and for embarrassing them with alleged Three Billion Naira (N3,000,000,000.00) Fraud. The authorities must undertake a thorough, impartial and transparent investigation as to the reasons why corruption charges were withdrawn, and to recover any corrupt funds.”

“The report also called for the reopening and effective prosecution of corruption allegations, including the alleged “looting of the benefits of families of the deceased employees of Power Holding Company of Nigeria (PHCN) levelled against a former Permanent Secretary in the Ministry of Power, Godknows Igali”

“The report shows how the Obasanjo’s administration spent $10 billion on NIPP with no results in terms of increase in power generation. $13.278,937,409.94 was expended on the power sector in eight years while unfunded commitments amounted to $12 billion. The Federal Government then budgeted a whopping N16 billion for the various reforms under Liyel Imoke (2003 to 2007) which went down the drains as it failed to generate the needed amount of electricity or meet the set goals. Imoke was alleged to have personally collected the sum of $7.8 million for the execution of the contract for the construction of the Jos-Yola Transmission Line, which was never executed. There were documented/reported allegations of corruption against Imoke that fizzled-out shortly thereafter.”

“Professor Chinedu Nebo handed over the assets of the PHCN to private investors on November 1, 2013. Prof. Nebo is alleged to have corruptly funded the privatized power sector with over N200 Billion despite privatization. The allegation of N200 Billion funding of the privatized power sector during Prof Nebo’s tenure should be thoroughly and transparently investigated and anyone suspected to be responsible prosecuted. Any corrupt funds should be fully recovered. The sum of N1.5 billion with which the vehicles were acquired was allegedly sourced from the diverted N27 billion insurance premium of deceased workers of the defunct Power Holding Company of Nigeria (PHCN).”

“When Rilwan Lanre Babalola (2008 to 2010) took over the affairs in the Ministry of Power, he met 3,700MW on ground and promised to increase it to 6,000MW and ensure a 24-hour power supply by the end of 2009. Six months after assuring Nigerians of making a significant impact in the sector, in September 2009, the 3,700MW capacity he met on ground dropped to 2,710MW which shortfall was attributed to inadequate supply of gas to the new generators.”

“The duo, Elumelu and Ugbane allegedly colluded in misappropriating over N10 billion public funds from the account of Rural Electrification Agency (REA). The research also established, based on evaluation and analyzing documents, a prima-facie case of misappropriation of unspent funds at the end of the year instead of returning same to the treasury. Alleged misappropriation of N500million to buy houses; diversion of REA’s funds; flouting of government’s rules on award of contracts and award of fictitious and unnecessary contracts without following due process.”

“The government of Nigeria handed over the transmission company to a Canadian company Manitoba, to manage and under a management service contract of over $200 million. Findings also show that the Transmission Company of Nigeria could not execute most of its approved 44 projects after having 50 percent of its N30 billion 2016 budget released to it. Funds were released from Eurobond. $23.6 million allegedly paid to Manitoba Hydro International (MHI) of Canada to manage the Transmission Company of Nigeria (TCN) would appear to be without due process.”

Former governor of Lagos under probe for graft

Nigeria nabs money laundering suspects with US$2.8 million at airport