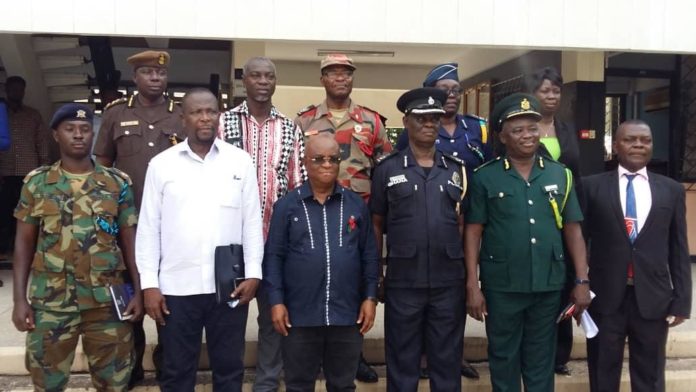 All Service commanders in the Volta Region have agreed to make available their expertise to uphold the integrity of the impending Unit Committee and District Assembly elections and the Referendum slated for December 17, this year.

The Commanders of the Ghana Immigration Service, Bureau of National Investigations, Ghana National Fire Service, Ghana Prisons Service, and Customs Division of the Ghana Revenue Authority (GRA) all pledged their support during the inauguration of a 10-Member Volta Regional Security Election Taskforce (VRESTF) in a brief programme in Ho.

Mr Peter Nantuo, Deputy Commissioner of Immigration said when the problem of lack of logistics, ration and transport were resolved it would be the beginning of good relations between officers and other ranks, which could be addressed at staff durbars long before the actual election date.

Others promised to provide the needed intelligence to guide the conduct of the Committee’s work.
The Municipal and District Security Election Taskforces would be inaugurated at their level for successful elections.
DCOP, Mr Edward Oduro-Kwarteng, Regional Police Commander and Chair of the Taskforce charged the members to ensure overall security of the elections, secure safe transport and storage of ballot materials and guarantee peace before, during and after the elections.

He urged the Committee to identify hard to reach areas, election hotspots, amicably resolve minor issues in a well-coordinated manner.

The Regional Police Commander said “failing to prepare is tantamount to preparing to fail and guided by history, this exercise will be successful.”

Mr Oduro-Kwarteng urged the Commanders to deliver a free, fair, transparent and credible elections.
Mr Eric Kofi Dzakpasu, Deputy Volta Regional Electoral Officer said relevant portions of the law needed to be amended to make local governance at the base partisan and synchronise it with district-level and parliamentary elections.

He said there was the need to amend Aritcle 243 clause (1) of the Constitution to make election of MMDCEs partisan and through a Referendum amend Article 55 clause (3).

Mr Dzakpasu said expected turnout of 40 per cent eligible voters must cast their ballot out of which 75 percent should vote yes to open the way for the elections.

He said the EC was busy with pre-election activities by undertaking limited registration, exhibiting voter register and issued receipts of nominations.

Mr Dzakpasu said there was window of opportunity for security agencies and the media to transfer their votes for proxy or special voting, between October 25 to November 4.

Dr Archibald Yao.Letsa, Volta Regional Minister said security was cardinal and a pre-requisite for development and challenged the service commanders in the region to work towards its success