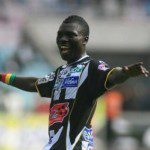 Konadu, 25, has been on a hunt for a new club since he terminated his contract with fellow Tunisian side CS Sfaxien.

The former Great Olympic full-back is reported to have failed a medical after an examination revealed he was still battling with an old thigh injury.

Club African has thus refused to sign the defender who won the CAF Champions League with Sfaxien in 2012.