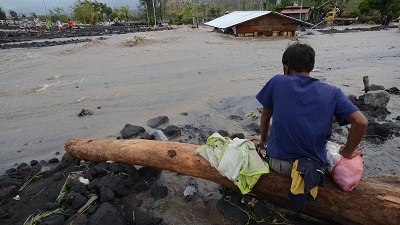 At least seven people were killed and more than 420,000 residents displaced as this year’s strongest typhoon slammed into the Philippines on Sunday, bringing “catastrophic” winds and torrential rains, officials said.

Typhoon Goni slightly weakened as it swept over the main island of Luzon, after making four landfalls since it hit the country’s east coast before dawn, the weather bureau said.

The typhoon, locally called Rolly, was packing maximum winds of 165 kilometres per hour (kph) and gusts of up to 230 kph as it moved west at 25 kph, the bureau said.

Disaster relief officials earlier reported that nearly 1 million people were forced to flee their homes in the affected areas, but later updated the figure to over 421,000.

In the worst-case scenario, officials said, up to 31 million people could have been affected by Goni, which was initially forecast to hit the capital region of metro Manila later Sunday.

But the weather bureau said Goni’s track shifted slightly, and Manila would not be directly hit by the typhoon.
“Catastrophic violent winds and intense to torrential rainfall” lashed nine provinces south and south-east of Manila in the past 12 hours, the weather bureau said. “This is a particularly dangerous situation for these areas,” it added.

The seven fatalities were reported from the province of Albay in the eastern region of Bicol, which bore the grunt of Goni’s onslaught, the Office of Civil Defence said.

Goni made its first landfall before dawn in nearby Catanduanes province, tearing off rooftops, and toppling trees and electric posts, according to initial reports.

It made its second landfall over Albay, where even some evacuation centres were damaged by its winds, provincial governor Al Francis Bichara said. “This may be the strongest storm I’ve seen in my life,” he told a Manila news channel.

Muddy floodwaters swept through communities in Albay, where some residents were seen trapped on the roofs of their homes. Electricity and communication lines were cut off, isolating some affected areas.

Bichara said three of the fatalities in Albay drowned when a river overflowed and a dike burst, while a fourth victim was crushed by a falling tree.

In the capital region of metro Manila, officials shut down the country’s premiere international airport for 24 hours until Monday “to protect the safety of air passengers and personnel from the threats of [the] typhoon.”
More than 20 domestic and international flights had to be cancelled.

Some shopping malls also suspended operations, while billboards and tarpaulins were folded and secured from Goni’s winds.

Goni is the strongest typhoon to hit the Philippines since Typhoon Haiyan battered the eastern and central provinces in November 2013, killing more than 6,300 people and displacing more than 4 million.

It was the 18th tropical cyclone to hit the Philippines this year. The country is battered by an average of 20 cyclones every year.

As Goni battered the Philippines, another cyclone, tropical storm Atsani, entered the country’s area, the weather bureau said. Atsani was moving towards the northern Philippines, with maximum winds of 75 kph and gusts of up to 90 kph.