At least ten people killed and wounded when unknown militant opened fire on a bus carrying Copts on their way to a church in Egypt’s southern province of Minya, state-run TV reported. 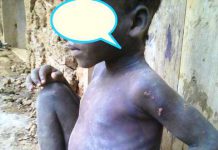