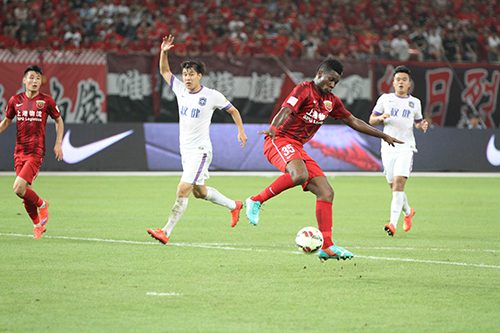 Shanghai SIPG coach Sven-Goran Eriksson says he is delighted with the dream debut made by his latest big money signing Asamoah Gyan despite his apprehension in risking the Ghanaian.

The Ghana striker scored in his first game for the port club in what eventually proved to be the winner in their league match against Tianjin Teda on Thursday.

Gyan had only had one training session with his new club prior to Thursday?s home league fixture.

The Black Stars captain was however good enough to win his new side a penalty to draw them level before scoring a header 10 minutes from time to win the game.

Gyan?s immense impact in the win which sees Shanghai overtake Beijing Gouan at the top of the Chinese Super League has received rave reviews already with the media even voting him the Best Player of the Round.

Eriksson admitted after the game he didn?t want to risk Gyan since he had not had a proper training session with his new team but was all the same satisfied with the output of his new signing.

?Gyan did very well, I had wanted him to start, but the fear of injury did not let him start, because it has been 30 days since he trained with the ball,? he said.

?With Gyan?s state of recovery, his performance will be better in the future, I am very happy.?

Shanghai SIPG will next face second-placed Beijing Gouan in their next league match on Monday.