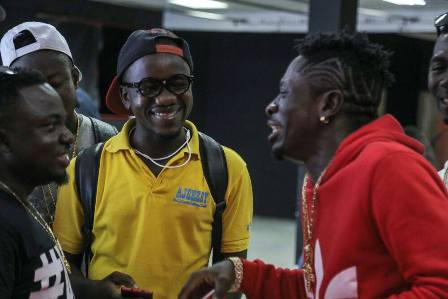 In the song the self acclaimed dancehall king talks about how people think he is a disgrace to society and the dancehall genre in totality, but amidst all these condemnation he pays no attention to his critics like the “Nonfa” (nonsense) King since his music keep topping the charts.

Speaking to Ajeezay concerning this endorsement he stated that Charles Nii Armah Mensah popularly known as Shatta Wale has been a real fan and a true supporter of his career from day one.

He went on to say that in 2014 the MOBO award nominee Shatta Wale sent him words of encouragement on twitter even when he had not found his foot in the Ghanaian comedy industry.

The Nonfa King also disclosed that during his first encounter with the “Chop Kiss” hit maker on the set of “Bei Gya” video shoot, Shatta Wale couldn’t hide how he enjoys watching his skits over and over with his wife.

Ajeezay is a fast growing Ghanaian comedian with a very promising future. He has performed on several stages and has been successful in carving a niche for himself as the “Nonfa King” meaning the king of wordplay.