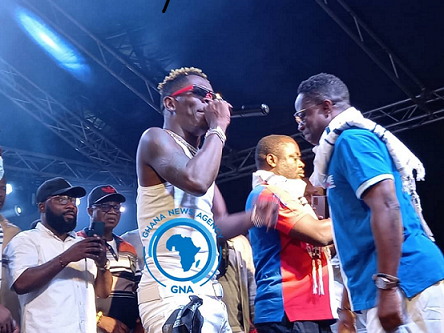 Ghana’s popular Dancehall and Reggae artiste, Shatta Wale, has called on the people of Hohoe to show long-lasting support for the newly elected Member of Parliament, Mr. John-Peter Amewu.

He said the development projects and plans of Mr. Amewu were good and deserved to be supported to do more.

Shatta Wale, known in private life as Charles Nii Armah Mensah Jr, said this when he thrilled multitudes from the Constituency to his numerous songs.

The show, which was part of activities to mark victory and thanksgiving for Mr Amewu was held at the St Augustine Park with some roads including Hohoe – Lolobi Road, flooded with people.

Shatta Wale said he was overwhelmed by the crowd which showed the extent to which he was loved in Hohoe.

He also revealed that he would work with upcoming artistes in the Constituency to release a song.

Mr. Amewu on his part expressed gratitude to Shatta Wale for his great performance.

He said he would continue to factor the youth into his development plans for the Constituency. 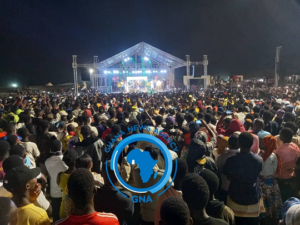 Mr. Amewu who could not withstand the rhythms and beats of the night took to the dance floor and exhibited his dancing skills drawing loud applause by the participants.

Some of the songs the people were treated to were, Freedom, Mahama Paper, Melissa, Level, Bulletproof, taking over, Low tempo, Ahodwo Las Vegas and his recent release; Hajia Bintu among others.

Some spectators who were not soaked with the performance said they would want Shatta Wale back to the Hohoe Constituency.