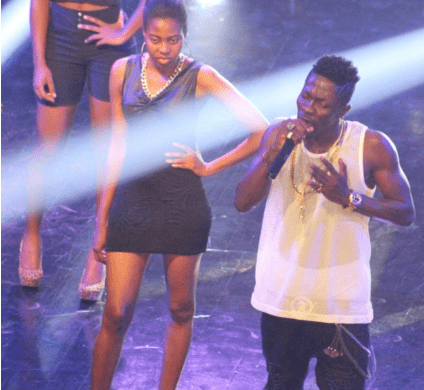 Dancehall artiste, Shatta Wale has met Charter House, organisers of the annual Ghana Music Awards, tosubmit his works for consideration for the 2016 edition of the awards.

The artiste, born Charles Nii Armah Mensah Jnr, was at the offices of the event organisers at the North Industrial Area, together with members of his management, to submit his songs.

Organizers called for entries for this year’s music awards on January 1 but it was unclear whether Shatta Wale, who, the previous year, had issues with organisers of the awards, Charter House, will submit his songs.

The ‘Kakai’ hit singer said he did not want to be nominated for the awards this year but has since changed his mind.

He told JoyNews on MultiTV in an interview that he will submit the songs because of his fans.

“Well you know I’ve gotten calls everywhere and it’s mostly from my fans, telling me to forget certain things and move with the system,” he said and added that his fans are the only people he listens to.

“I feel they are my god and they really pushed my music and get it to where it has to be and I believe they made me who I am so I told my team since the fans are asking then let’s submit it. I’m a type that doesn’t fancy awards but since the fans want it, we will submit it whether we win or not,” he added.

As it stands now, Shatta Wale’s hopes are in the hands of the Ghana Music Awards board who will decide his eligibility to be nominated for the music awards.