Every day, Shazam receives tens of millions of requests from users around the world who want to know more about the artist behind the song they’ve just discovered. These Shazams can come from anywhere—social media, car commercials, coffee shops, the mall —making them a powerful tool for predicting the next class of global superstars.

Today, Shazam unveils its annual Predictions 2023 playlist, a 50-track selection of artists that are perfectly poised to have a breakthrough year. Additionally, Shazam is spotlighting 5 artists from the list who have the potential to break out globally in 2023 and, for the first time, 5 artists who are gaining popularity regionally. Based on Shazam’s uniquely predictive data and algorithms, and coupled with the expertise of Apple Music’s global editorial team, this incredible selection of artists show early indicators of future growth — early and consistent momentum in Shazam activity, as well as discovery trends in more than one country.

Looking back at last year’s predictions, Shazam demonstrated, once again, its ability to uncover talent from every corner of the world earlier than any other service. Artists like the incredible Ayra Starr, who was one of Shazam’s five featured predictions last January, made Shazam’s Global Top 10 in October and is now being heralded as an artist to watch in 2023 by other platforms. Looking at streams, several listed artists saw their plays more than double on Apple Music worldwide from Dec. 1, 2021 through Nov. 30, 2022, compared to the previous 12 months, including Ivan Cornejo (+329%), DannyLux (+189%), Mina Okabe(+217%), La Zarra (+308%) and Lojay (+696%)

This year’s selection represents another remarkably global and diverse group of talented artists, hailing from all corners of the globe including Japan, Colombia, Spain, France, and Nigeria.

Listen to the Shazam Predictions 2023 playlist exclusively on Apple Music worldwide at apple.co/shazampredictions23

Ten artists to watch out for in 2023, according to Shazam’s Predictions

Origin: USA
Genre: Pop, Rap/Hip Hop
First Shazam: Hollywood, USA (6 Mar 2021)
Since it dropped in August, Ice Spice’s breakout hit “Munch (Feeling You)” has been a mainstay on Shazam’s Hip-Hop/Rap chart, peaking at No. 11.
“Shazam has always been so useful for me whenever I needed to find the title of a song playing,” Ice Spice tells Apple Music. “I’m happy that it exists!”

Origin: Armenia
Genre: Indie Pop, Folk Pop, Pop
First Shazam: Payyannur, India (10 Sep 2021)
With “SNAP” the Armenian Eurovision entrant delivered one of the 100 most Shazamed songs of 2022, a devastating, folk-informed English-language breakup tune that first found an audience on TikTok, which led to Shazams peaking in October, months after the competition. It had eight Shazam No.1’s across Europe and Asia.
“It’s very cool to me that people from all around the world can discover my music through [Shazam],” Rosa Linn tells Apple Music. “They can hear the song, like it, and instantly find out that it’s me who is singing it. I gain fans and listeners and it directly impacts streaming.”

Origin: USA
Genre: Hip Hop/Rap
First Shazam: Kirkland, USA (26 Aug 2020)
“Enough,” an inspiring pop-rap hybrid, made a mark on Shazam charts in 40 countries.
“I’ve used Shazam as a fan first for as long as I can remember,” charlieonnafriday tells Apple Music. “It was a really exciting and full-circle moment for me when I realized my fans would be using Shazam to listen to my music in the same way I did, and still do, for my favorite artists.”

Origin: Puerto Rico
Genre: Latin Urban
First Shazam: San Juan, Puerto Rico (16 July 2021)
“Riri” has been Young Miko’s most-Shazamed song to date, resulting in her all-time Shazams peaking in September.
“Shazam, in my opinion, is one of the best music platforms,” Young Miko says. “Being able to discover songs and identify a sound you like, to me, is awesome. Thanks to Shazam I’ve had a lot of people discover my music and know they’re gonna keep coming.”

Origin: USA
Genre: Pop
First Shazam: San Jose, USA (15 Oct 2021)
Benson Boone made his debut on the Shazam global chart over the past year with two songs entering the top 200, each getting more than one million Shazams: “GHOST TOWN” and “In The Stars.”
“My manager will always send me screenshots of trending Shazam songs,” Benson Boone tells Apple Music. “When I see my name high up on that list it blows my mind to know people are wanting to know what my songs are!” 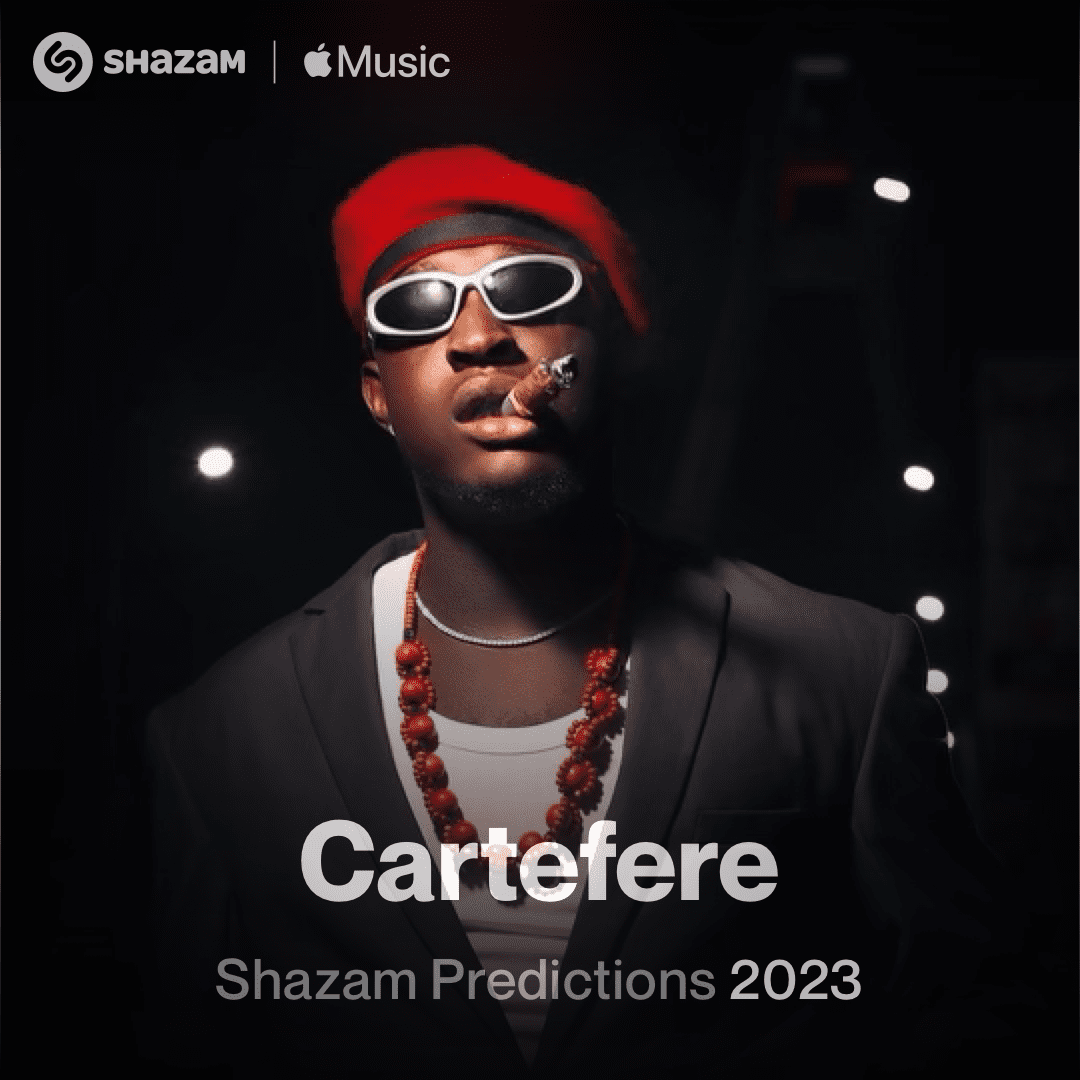 Origin: Nigeria
Genre: Worldwide, Afro-Beat
First Shazam: Enugu, Nigeria (29 July 2022)
Carterefe’s first single charted on 13 different national Shazam charts, including No. 1’s in Nigeria, Cameroon, and Ghana.
“Shazam basically aided in boosting my music career to this point,” Carterefe told Apple Music. “Having the sound was one step, but Shazam made it easier to connect me as an artist to new listeners who may not have known me prior to hearing the sound somewhere and got to Shazam it. In a click the new user is straight on any of my digital platforms to listen to what I have, it’s really been impactful and I really want to say I’m personally appreciative of it, for what it’s done for my music career and other sounds basically.”

Origin: France
Genre: French Pop
First Shazam: Port Louis, Mauritius (20 Nov 2020)
“Tout savoir” was Adé’s first song to surpass half a million Shazams. It has been on the Shazam chart in France every day since the week of release; over 200 consecutive days.
“Shazam is a very powerful tool for a new artist because it doesn’t need promotion,” Adé told Apple Music. “It’s just a bridge between music and listeners. I use it a lot in my everyday life and I build playlists with it.”

Origin: Spain
Genre: Hip Hop/Rap, Trap
First Shazam: Madrid, Spain (1 Dec 2020)
“Pico y Pala” charted on Shazam in nine countries across Spain and Latin America this past year.
“Shazam has undoubtedly helped me a lot in my career,” Munic HB told Apple Music. “Especially in a case like mine, when a song hits very hard globally and you see in the app all these places where you think they didn’t know you at all, and someone is playing your song and someone else is drawn by it and Shazams it, it’s like the most organic thing that can happen to your music. And the other way around, it’s the same when I’m at a club or event and something playing catches my attention, I can connect with that artist.”

“Overdose” by Natori was the most-Shazamed debut single within J-Pop over the last year.
“I believe Shazam is an important gateway for my music to be discovered, especially in this busy lifestyle we live in,” natori told Apple Music.

KEITYN’s most Shazamed song “El Egoísmo”, with Mike Bahía and DEKKO, spent two weeks on Shazam’s Peru Discovery Top 10 and a month on the full national top 200 chart.
“Shazam has been a great help because there are songs that we’ve suddenly heard on the streets, or somewhere else, and we don’t dare ask what song it is,” KEITYN told Apple Music. “But if we have a chance, we just need to open [Shazam] and it will tell us the name [of the song]. And I think this has been amazing because no songs can go unnoticed.”

Shazam is one of the world’s most popular and highly rated music apps, helping people identify, explore, and share songs playing around them or on their device. Shazam identifies over one billion songs per month and its charts reflect both early and global music trends. Shazam is available on iPhone, iPad, iPod touch, Mac, and Apple Watch, plus Android and the web. More information is available at apple.com/shazam.