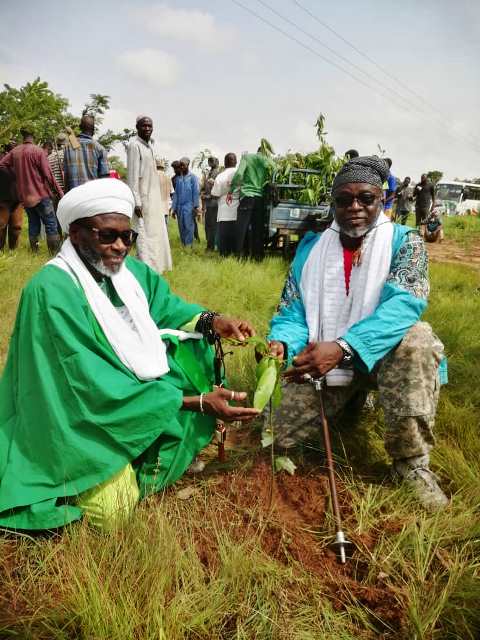 The leader of Shia Muslim community in the Northern Region, Shehu Dalhu Abdul-Mumin in partnership with Zunglana, Chief of Kulaa who doubles as council of state member of Northern Region Alhaji Col Mahmoud Tahiru Rtd, have  led some prominent personalities and the youth  in the region to plant trees under the Dalhu Greening project as part of national efforts of making Ghana green.

The tree planting exercise which took place at Kulaa community in Tamale today, was supported by Food World Restaurant.

The  exercise which was undertaken by the Shia Muslim leader, coincides with the national exercise.

Already, Shehu Dalhu Abdul- Mumin had declared to green both Tamale Metropolis and Sagnarigu Municipality to combat climate change in these areas.

By that, he has advocated for every resident to endeavour to plant a tree in order to consolidate efforts by the government to combat climate change in the country and reclaim Ghana’s lost vegetation.

Speaking to the media after the tree planting exercise, Shehu Dalhu said, tree planting should be a concern to the entire humanity irrespective of one’s religion, race or age because the issue of climate change was real and a battle between humanity and nature which concerns everyone.

According to him, Tree planting is very vital for the planet earth because they give us oxygen, absorb carbon dioxide, stabilize the soil, protect water bodies, reduce global warming and give life to the wildlife.

“That is what science taught us,” he said.

Apart from what science teaches, he said trees have spiritual connotations which guarantees that, cities with more trees have less crime rate and the more trees we plant, the less crime is recorded and peace automatically prevails.

He also averred that Tree  planting is the Supreme desire and Ecological Sunna of the prophet Muhammad (saww) and that there is no one who has never sat under the shade of the tree.

“Is there anyone who has never benefited from the tree,” he asked, saying that Trees are Lungs of the earth.

Shehu Dalhu Abdul-Mumin however proposed that Educational curriculum must adopt tree planting so that every student will be taught to plant a tree and nature it till maturity.

He believes that “We can’t stop cutting trees and that is the reason we should plant more.”

On his part the council of state member and chief of Kulaa thanked the people for supporting the call of planting the trees. He charged the elders of the community to attach attention to the trees planted and call on other communities to emulate the practice.