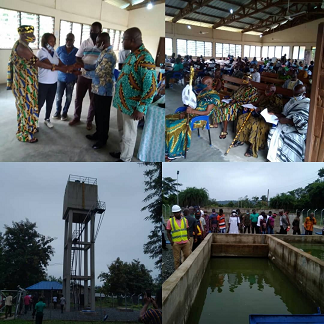 A GHC 1.6 Million two-surface water system project for the Shia community in the Ho Municipality has been handed over to the Assembly after final inspection at a brief ceremony at Shia.

The project, which is a Ghana-Spain Debt Swap for Development Project (DSDP) was executed by UNIMENSIL Ventures Limited under the auspices of the Volta Regional Directorate of the Community Water and Sanitation Agency (CWSA) and the Water Supply Improvement Agency (WAIP).

Madam Antoinette Ama Agboado, Chief Water and Sanitation Engineer of CWSA said almost 3,000 population of the Shia community would benefit from the water project with an overhead tank capacity of 30 cubic metres.

She said there are 11 distribution outlets five of which would be available to the community while the remainder would serve institutions including schools.

She warned the indigenes to avoid trespassing into the intake point or use it as a pool for swimming purposes as people could drown.

Mrs Agboado said water and sanitation committees have been dutifully trained and imbued with accounting and hygiene management principles to lead the community in the use of the resource adding that funding for the project would have to be repaid and urges the community to pay while they consume the water.

The MCE, who referred to the community as ‘Small London’ due to its neatness and proper layouts asked the people to avoid felling trees at the catchment area of the water system and warned against other human activities that could pollute the resource.

He said “desist from illegal logging, dumping of refuse into the water, farming around the intake point and create buffer zones to revitalise the environment and make availability of water all year round.’’

Mr Pi-Bansah said the construction of the iron removal plant delayed the project, which was started in 2018 but believed the handing over phase has brought some smiles to all.

He said 25 public water-closet places of convenience are being constructed across the Municipality.

Mr Divine Bosson, an indigene and Regional Coordinator of National Disaster Management Organisation (NADMO) said within a record time of three-and-a-half years four crucial development projects have been provided by the government to the Shia community.

He mentioned them as a 12-Unit classroom block at its new site for the Shia Senior High Technical School, the water project, the electrification project, and some roads works.

He entreated the people to show gratitude to the government through votes.

The Coordinator said “since government remembered you and gifted you with projects do the needful during the December elections.’’

Togbe Dadzawa III, Paramount Chief of Shia Traditional Authority said they were grateful to the government for the provision of potable water for the community and gave the assurance that the facility would receive utmost maintenance care to prolong its longevity to enhance the health of the people.

“We commend the government through the Regional Minister, the Municipal Chief Executive, and the NADMO Coordinator for making it possible for the community to become beneficiary of the projects”.

He appealed to the government to consider tackling the community’s road network and extend electricity to underserved communities in the area.