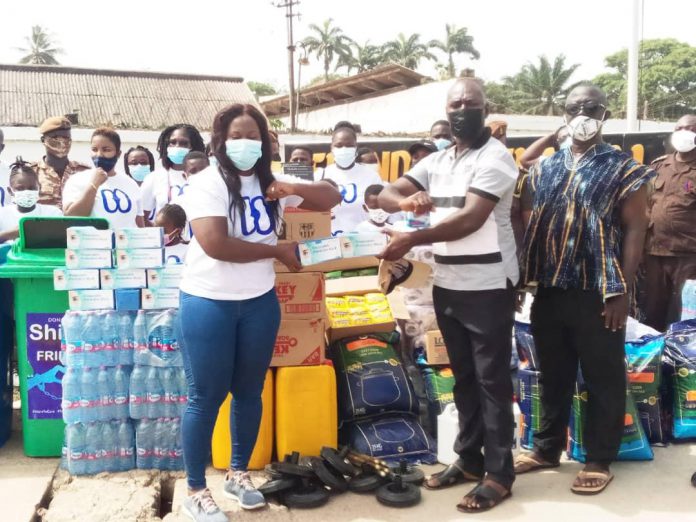 Shirley and Friends, a Charity Organization has donated various items to the Sekondi Prisons to support the upkeep of inmates as part of activities to mark Easter celebrations.

The Charity organization over the years, donated to communities and institutions across the country like the Egyam Orphanage Home, Axim, Tarkwa-Nsuem and Korle-Bu hospitals among others.

The donation was led by the Group Leader, Shirley Tony Kum with support from members, including; some old students of Mfanteman Girls Senior High and other professionals from all walks of life.

Presenting the items at a short ceremony held at the forecourt of the Sekondi Prisons, Madam Shirley Toni Kum said the gesture was to symbolize the love of Christ behind the Easter festivities to give hope to the inmates.

“If Christ died to save us from our sins, we will also want to demonstrate the love behind Christ’s sacrifice to give hope to inmates who feel the world has rejected them”, she stated.

According to her, the Bibles and Qurans were significant since this was a reformatory facility which is believed would be a point of reference to change lives.

She also called on other corporate bodies to support the vulnerable in society in their own small way even though COVID-19 had had a toll on many companies.

“It is understandable that COVID-19 made things difficult for many companies, but I will urge them to support the vulnerable in society in their own small way during seasons like this. Imagine being in such an environment, where the world has turned it back on you”, she stressed.

Superintendent Samuel Amafio, Western Regional Operations Officer of Sekondi Prisons, who received the items on behalf of the Prisons was grateful to the Group’s intervention and expressed appreciation especially, for the inclusion of the Bibles, Qurans and the waste bins.

“The inclusion of the Bibles and Qurans is expected to help in the religious reformation of inmates.
“Also, the facility has been in need of waste bins for a long time and therefore their inclusions will solve that challenge of the facility”.

He also thanked the Group for the consumables since it would go a long way to augment their nutritional requirements.

Children of Osu Children?s Home treated to series of plays