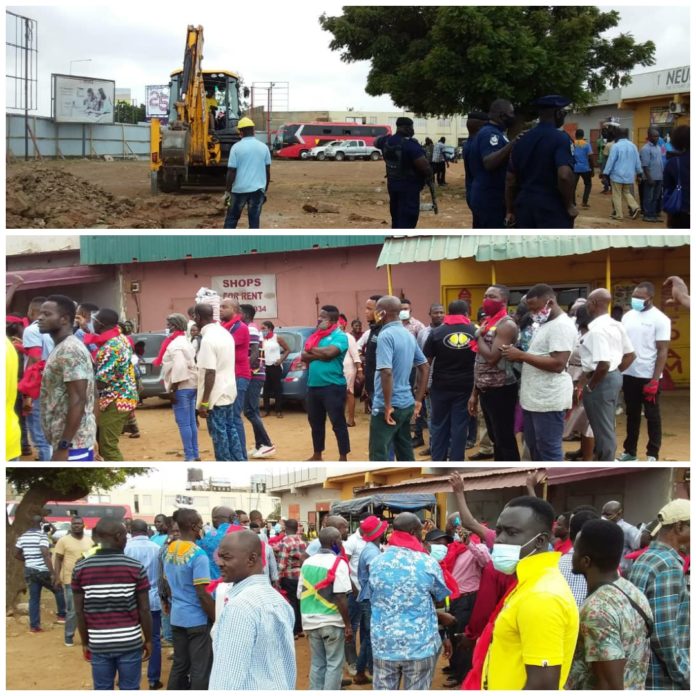 Shop owners at the Tema Industrial Area Market popularly known as the Mankoadze market, have protested against an alleged sale of the green belt adjacent their shops to a Chinese man.

The shop owners together with their workers, clad in red apparel, protested on the bare land which served as a bus terminal for the VVIP.

Mr Samuel Essuman, Chairman of the Tema Industrial Market Owners Association, told the media that when members acquired the land for the construction of their shops, the TDC Company Limited and the Tema Metropolitan Assembly (TMA) informed them that the stretch of land directly adjacent to the market and facing the main habour road was a green belt.

Mr Essuman added that due to that caution, they stayed away from the said buffer zone and none was allowed to build on it.

He recalled that the land was given to the Chinese to operate a bus terminal some few years ago with the explanation that operators of the terminal would use it temporally therefore no permanent structure would be allowed on it.

He however added that the company erected shops on the land which they rented out in dollars, stressing that they believed TMA had sold the land to the Chinese investor who was now constructing a three storey 60 shop building and other permanent structures on the said green belt.

Members of the Association, he noted, were calling on the TMA and TDC to stop the construction of the permanent structures on the land, explaining that doing so would have dire consequences on them should fire break out in the market.

“Greenbelts are meant for emergencies and ecological renewal. The trees on them absolve carbon which is produce in large quantities in Tema.

“We have 120 shops here, each has about three workers, so if there is an emergency like fire, this is the only space that we can run to for safety and move our wares to,”he said.

“It is the only space Fire Service can park to help us. If we look on and this place is fenced and used for permanent structures, we have no other place, and we all know that fire outbreaks are very frequent in this country,” Mr Essuman added.

Meanwhile, Mr Felix Mensah Nii Anang-La, Tema Metropolitan Chief Executive, has denied allegations that he had a hand in the selling of the green belt.

He explained that the land was given to the VVIP somewhere in 2012.

Mr Anang-La added that most road reservations in Tema had been turned into dumping sites therefore he supported the idea of giving out such lands for developments adding that “we can’t allow the place to be like it was some 60 years ago”.

He said, he asked the operators of the terminal to beautify the place when he observed how passengers’ luggage were dumped on the ground among other unpleasant sights when he paid a working visit to the place.

He added that the Assembly’s engineers were monitoring the ongoing work on the land, revealing that the development was to make provisions for passenger’s restrooms, cargo area and offices for the terminal’s management.

“People should stop making cheap politics out of this, I won’t fight against the public interest as an MCE, ”he stated and gave the assurance that “we will put something nice there to beautify that area”.