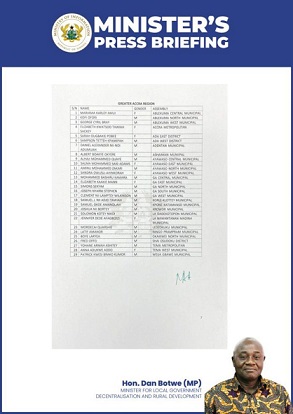 “The news of Mr Sekyim’s appointment never surprised us because that is what we had been pushing for all this while. So, for those of us in this Constituency and under Ga North, we have received what we expected,” he said.

In an interview with the Ghana News Agency on Monday, the Assistant Secretary said Mr Sekyim was a listening person and unifier.

He said the MCE nominee had a good relationship with Mr Moses Anim, Member of Parliament for the Constituency, the Assembly and members of the New Patriotic Party, as such, he would get their full support to achieve great success.

Mr Omane said Mr Sekyim was a well-educated individual with a Bachelor of Science (BSC) in Nursing, and currently pursuing a Master’s Degree in Public Health at the University of Ghana, Legon.

He said before his nomination, Mr Sekyim served in many capacities such as being the Tertiary Students Confederacy (TESCON) coordinator at the Agogo Presbyterian University College.

He has also served as Organizer of the Constituency for two terms.

Before his nomination as MCE, Mr Sekyim was the National Disaster Management Organisation (NADMO) coordinator for Ga North.

Mr Omane urged the MCE nominee to put the necessary measures in place to draw development to the Municipality.

“Ga North is a newly created Municipality and needs a lot in terms of development. For example, we only have 27 percent road network and we hope Mr Sekyim would make that increase,” he said.

The Assistant Secretary thanked President Nana Addo Dankwa Akufo-Addo for honouring their request and giving them Mr Sekyim as their MCE.

He said they would work tirelessly to ensure that every part of the Constituency experienced development and hence, prove the President right for honouring their request.