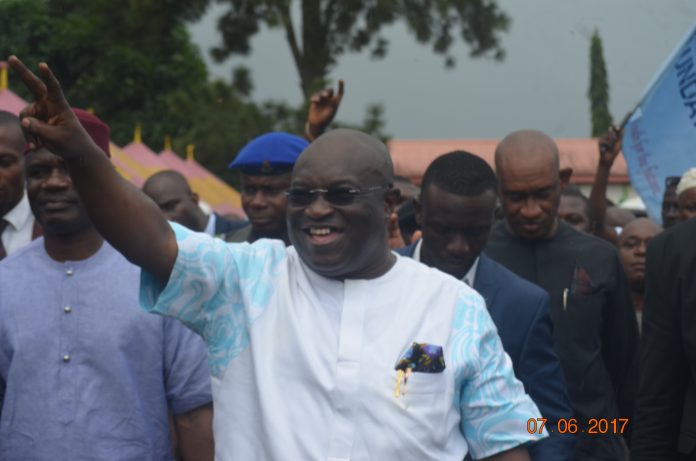 My dear Governor, It is no longer news that you,in one fell swoop, dissolved your entire cabinet leaving just your Commissioner for Finance, Attorney General/Commissioner for Justice and Chief of Staff, but a lot of Nigerians especially Abians have continued to wonder what must have precipitated your decision, even though the constitution of the country gives you as a governor or any holder of executive office the authority to appoint and remove whoever you choose to work for you.
For a governor who unarguably was the most distracted since assumption of office – owing to the many legal battles you overcame within and outside your party – many Nigerians and particularly Abians may feel you ought to continue to sustain the tempo of governance with the present crop of commissioners who have been working with you since the last two years but it clearly obvious that the as a first term Governor must have learned a few things.
One of the hallmarks of a good leader is never to write any person or idea off until you try them. Gov. Ikpeazu did a good job with his take off as he was one of the few state govs who swore in his cabinet early in anticipation of the enormity of work to be done in Abia. A state that has suffered years of infrastructural deficit even under the control of military and civilian leadership and is yet to realise it’s natural potentials both in terms of human and material resources.
For those of us who shared the hope and aspirations of the average Abian who’s desire is to see a government that will work for them and bring basic improvements to their living condition. However, what we had for two years was constant litigation against the electoral legitimacy of the Ikpeazu led administration. Having noted that, the Supreme Court with its verdict in favour of gov. Ikpeazu seemed to have given the governor a fresh opportunity to deliver on his promises to Abians, and the opportunity he didn’t hesitate to grab by overhauling his cabinet.
With the recent tour of all 17 local government by the governor, I keenly observed the overwhelming goodwill Dr. Okezie Ikpeazu enjoys amongst Abians, just as he was literally given a confidence vote by most Abians to pursue his four year agenda with the remaining two years and he seems to have embraced that challenge with greater determination, realising the fact that he will be judged not by words but by works, hence his decision to dissolve his cabinet.
Even the Chief Press Secretary to the Governor, Eyinnaya Appolos who described his principals decision as normal, just like a game of football which has two halves and the decision to determine which players will be substituted or which players to remain during either halves solely lies with the head coach who alone knows what outcome or results he wishes to achieve with the players he picks at the end of the day.
WHAT WAS WRONG WITH IKPEAZU’S CABINET?

Nigeria Elections: CNPP Urges INEC To Stick To The Rules Of The Game