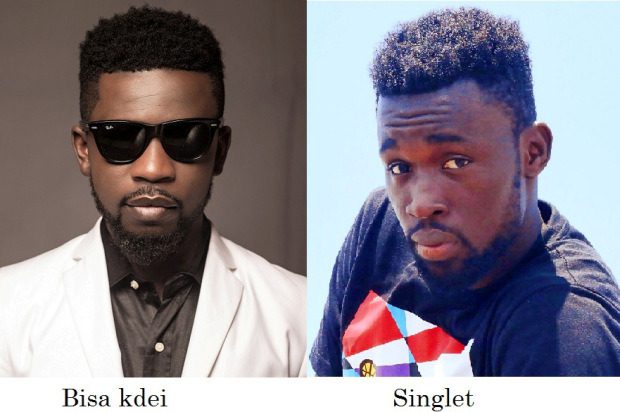 A Ghanaian artiste versatile in hi-life,hip-life, hip hop and Afro pop music has pointed accusing fingers at the ‘’Mansa’’ Hit maker, Bisa k’dei, for copying his style of singing way back when he bisa was nobody .The young artiste who is known as Singlet is a Takoradi base singer and he is sign to caddy Entertainment.

Singlet,in an exclusive interview with Yours truly onellpaakwesi.com alleged that some years back when bisa kdei was not in the mainstream music and nobody even knew him,there was a pool party in Tesano and bisa happens to be there to perform like him.

According to singlet,Bisa wasn’t singing like how he does now and it was him was was doing that kind of style.He claimed that after the programme,Bisa came up to him and congratulate him on his impressive style of singing only for him to copy his style years on. Asked by this reporter why it took him long to say this and isn’t he saying this to ride on bisa’s fame? he gave out his usual gentle smile and said he is already well known and doesn’t need this publicity stunt to be famous.

Singlet,born Benjamin Walter Addison rose to fame with his hit songs like Choice,By force,the way you love me etc.He has done many callabo with most of the artist such as Castro, stay jay,Guru and the american base fante rapper nana yaw celestine.He has been tipped as the jnr Castro because of his versatility,hardwork ,outstanding vocals that make him flow with originality and genuineness and has made him one of the best and biggest musician in the secondi-Takoradi and Ghana as a whole.

Singlet latest single sunsum p3 is making round in both social media and the airwaves,download and listen below and compare the voices if indeed bisa kdei copied his style of singing.

How AR-technologies change our shopping habits

PALI : EC must work to uphold electoral integrity amid COVID-19