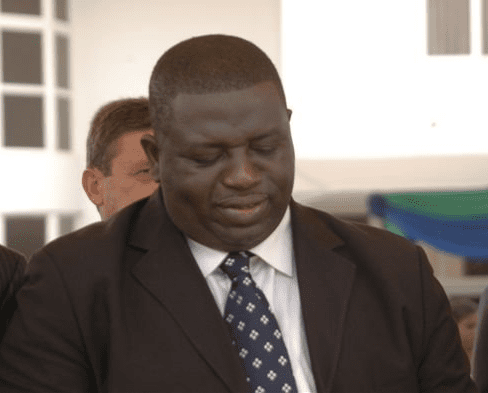 On this sad occasion, words are unable to appease a grieving heart. Indeed, what can I really say about John; my friend, my young brother, my trusted colleague? I first met John in 1987 when I had the pleasure of sitting in on the interview which was arrange to assess him for the position of the Chief Public Relations Officer for the AGC.. Even though he was not selected purely on grounds of inexperience, he left an indelible impression on all of us. I was impressed with him to the extent that I decided to remain in contact with him. At each turn, he made me aware that his ultimate dream was to work for Ashanti.

John’s dream of joining Ashanti was finally realized in 1996 after obtaining an MBA in London. As was expected, his thesis was on the AGC. He was employed as a Senior Public Affairs Officer in the Corporate Affairs Department. Working under the distinguished leadership of James Anaman, with whom he struck a dynamic relationship, John developed into one of the finest investor relations officers in the industry. He was highly respected by investors who visited our operations regularly. His great sense of humor, his ready smile, his respect for all who came into contact with him, earned him several accolades. He was a generous soul, always ready to help others and of course Ashanti was his greatest passion. He put in many tireless hours, pushing the Ashanti agenda. John was an eternal optimist, always willing to pitch in and do whatever was needed, all the times believing that things will work out in the end.
I can regale you with amusing stories and anecdotes about soccer, politics, you name it. All these were based on the idiosyncratic views John held on all such matters. Time will not permit me to do so but I am sure Big John will like me to share on particular anecdote with you.

In 1996, out of concern for his weight, I arranged for Big John to accompany me on my annual visit to the Stellenbosch Health Farm in Cape Town. There the “inmates” were subjected to what can only be described as starvation diet for two weeks. At the end of the period, John had lost a lot of weight and was looking very trim. On the way back home, I encouraged him to continue on the healthy eating culture we had just been introduced to and teased him that I will not forgive him if all the investment I had made in him at the health farm went to waste.

In other words which only the indomitable John could utter John used a title of endearment he had appropriated for me he said “Otumfuo, enye me ooo. Eye waakye no”. When I came to terms with the fact that I couldn’t wean him off the waakye, we compromised that he will embark on daily walk. So John reported to regularly hat he did a 7km walk everyday around his neighborhood.

Even when I left for South Africa, John and I did not lose our communication. He dutifully kept in touch and was always around when I needed him. For me personally, it was during that many challenging times I have had in life that I felt the full weight of John’s unfailing loyalty and support. John was a good human being par excellence. Over the years, I developed a very personal relationship with him and it was with great pride that I considered him a member of my family.

Of course John was fiercely protective of his passion Ashanti, and one memory, which really illustrates John’s fearless defence of Ashanti was when he then almighty Anglo-America Corporation started sniffing around the company with the intention of potential takeover. John with no prodding from the management or his immediate boss or colleagues, instigated a strong media campaign to put the fear of the Lord in Anglo- America, with the objective of highlighting that Ashanti was a prized national asset which will not go for cheap. This was the extent to John’s selfless commitment to the promotion of the Ashanti brand. It is a terrible irony that John died in the line of duty, once again selflessly doing what he believed needed to be done to save the Obuasi mine. John believed passionately that if the activities of the illegal miners were not managed properly the prospects for the reopening of Obuasi mine will be hugely compromised.

It is my hope and prayer that the tragedy of this terrible loss would let all of us appreciate that the Obuasi crisis is gradually slipping away from us and that without immediate corrective actions by all stakeholders particularly the Government, the prospects of the reopening of this great mine will be lost. For the sale of Obuasi, and indeed for the sake of Ghana, John’s death must not be in vain!!
Fellow mourners, I cannot even begin to imagine the pain that Roselyn and the children must be going through at this time.
The loss of a caring Husband, loving father, indeed a selfless breadwinner in such unnatural circumstances in these very difficult times cannot be easily fathomed. John was a generous man and I pray that beyond the words of comfort and support Roselyn and the children so richly deserve, providence will fill the yawning gap that the untimely death has opened up.

Finally, John gave AGA his total commitment and loyalty. It is again my hope and prayer that this remarkable dedication to the corporate cause will be returned in greater measure by AngloGold Ashanti in any decisions affecting his estate. Big John, my trusted friend and bother, wherever you are, be assured that your life with us will always be remembered.

You truly left your footprints on the sands of time!

Christians reminded of their mandate to preach the gospel

Georgina Wood, Akua Kuenyehia and others own state lands

Understanding human behaviour: The magic in making peace in our society

Tributes: Institutions, individuals are welcome to contribute in memory of former President Rawlings

Media must not sacrifice COVID-19 for elections-Sam Jonah