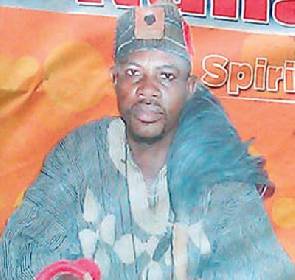 Six young men have been arrested by the Nkawkaw police for murdering a 46-year-old fetish priest and his nephew at Kwahu Besease near Kwahu Praso for failing to change Ghc10,000 to Ghc100,000.The six men, including juveniles, are Abdul Malik, Kwame Ofosu and John Weah, all aged 17 years, Kwame Isaac, 19, Kwasi Alhassan, 22 from Kwahu Jejeti and Richard Sarpong, 20, from Nkawkaw are in police custody for further investigation and prosecution.Briefing the Ghana News Agency, DSP Gyabeng Manu, the?Nkawkaw District Police Commander?said the six persons sent Ghc10,000 to the fetish priest, Nana Asare Obinim, at his shrine at Kwahu Besease to turn it into Ghc100,000 for them.The fetish priest failed to do so after several visits to his shrine.The District Police Commander said on July 30, the six people went to the fetish priest?s residence to demand their money as he had failed to fulfill his promise, and a misunderstanding ensued between them resulting in the men killing Nana Obinim and his nephew, Owusu, in the night.He said the six people put the two dead bodies into the fetish priest?s Titan Pick- up vehicle with a temporal number plate DV6059-14, drove it to the community cemetery and buried them in an old grave but were later arrested.DSP Manu said the police had exhumed the bodies and deposited it at the Nkawkaw Holy Family Hospital for autopsy.