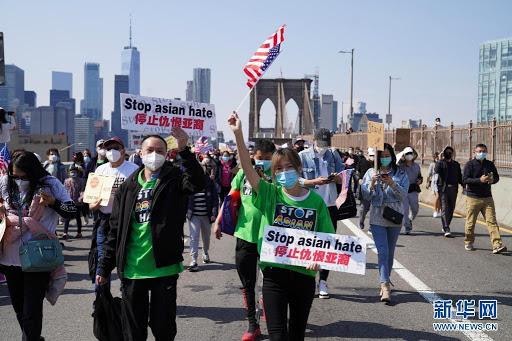 “We hold these truths to be self-evident, that all men are created equal, that they are endowed by their Creator with certain unalienable Rights, that among these are Life, Liberty and the Pursuit of Happiness.” Although 245 years have passed since these sentences were incorporated in the preamble of the U.S. Declaration of Independence, the “self-evident truths” are still not reality in the U.S.

A few weeks ago, the high-profile George Floyd case finally got a judgment. The judge presiding over the trial announced that former white U.S. police officer Derek Chauvin was found guilty on all counts of murder and manslaughter over the death of African American man George Floyd. The overdue judgment was waited by people longing for racial justice for nearly 11 months.

The death of George Floyd showed the world that systemic racism is a “stain on our nation’s soul”, U.S. President Joe Biden said in a televised address to the nation on the night of April 20 following Derek Chauvin’s guilty verdict.

Why is America’s original sin of racism so hard to eradicate? Why is the struggle of the ethnic minority groups in the U.S. for racial equality and justice always solitary and hopeless like a cry in a lonesome wilderness? The U.S. society needs to seek answers to these questions.

Ethnic minority groups in the U.S. have long lived in misery since the colonial period of the American history, which is mirrored in the well-known novel Uncle Tom’s Cabin. As Harriet Beecher Stowe wrote in the preface of her novel Uncle Tom’s Cabin, “The scenes of this story, as its title indicates, lie among a race hitherto ignored by the associations of polite and refined society; an exotic race, whose ancestors, born beneath a tropic sun, brought with them, and perpetuated to their descendants, a character so essentially unlike the hard and dominant Anglo-Saxon race, as for many years to have won from it only misunderstanding and contempt.”

Since the colonial period, White Anglo-Saxon Protestants, with their dominant position in such fields as politics and society, had systematically implemented racist policies based on white supremacy on the American soil, and conducted long-term slaughter, exploitation, persecution, discrimination, and attacks against Native Americans, African Americans, Asian Americans, and people of other ethnic minority groups.

It was after the mid-20th century that racial segregation against African descendants was gradually abolished. The Chinese Exclusion Act, which was passed in 1882 in the U.S. to prohibit all immigration of Chinese laborers, had not been abolished until November 1943. It was in 2012 that the U.S. House of Representatives passed a resolution to formally apologize for the act.

Nevertheless, racism still lingers in the U.S. in the 21st century, and its existence has been increasingly proven comprehensive, systemic, and persistent.

Americans of color generally experience discrimination not just as the actions of individual whites in one social arena, but rather as the everyday, recurring actions of white actors across many of life’s arenas-actions backed by a multifaceted and powerful system of institutionalized white power and privilege, pointed out American scholar Joe R. Feagin.

“From prison rates to segregation to wealth disparities to educational inequality, the numbers show that (people of color) continue to suffer disproportionately across most social metrics,” with racism at the root, said a critique published on the U.S. News & World Report.

Former U.S. President Barack Obama said in a message sent in response to the tragic killing of George Floyd that “for millions of Americans, being treated differently on account of race is tragically, painfully, maddeningly ‘normal’.”

Over the past one year or so, the COVID-19 pandemic has revealed a stark racial divide that determines life and death created by racial inequality in the U.S.

Anti-Asian hate crime in 16 of America’s largest cities increased 149 percent in 2020 from 2019, and such crime reported to police in 15 of the country’s largest cities rose 169 percent in the first quarter of 2021 in comparison to the same period in 2020, according to analyses of official preliminary police data by the Center for the Study of Hate and Extremism at California State University, San Bernardino.

The frequent relapses of the severe and lingering illness of racism in the U.S. run counter to the conscience of humanity as well as the international commitments the U.S. has made.

Last year, the U.S. was severely criticized by representatives of many countries for racial discrimination during the sessions of the United Nations Human Rights Council (UNHRC).

During this year’s regular sessions of the UNHRC, representatives of 116 countries and relevant international organizations called on the U.S. again to make solid efforts to solve its problems including racism and racial discrimination when discussing and assessing the country’ human rights issues and situation.

The reality in the U.S. has already made people around the world disappointed with the governance capability of the U.S. government.

As pointed out by E. Tendayi Achiume, UN Special Rapporteur on Contemporary Forms of Racism, Racial Discrimination, Xenophobia and Related Intolerance, for black people in the U.S., the domestic legal system has utterly failed to acknowledge and confront the racial injustice and discrimination that are so deeply entrenched in law enforcement.

“I have a dream that my four little children will one day live in a nation where they will not be judged by the color of their skin, but by the content of their character.” It has been nearly 58 years since the well-known remarks of the famed African American civil rights activist Martin Luther King Jr., and yet the American society is still like the old one as skin color determines people’s destiny and ethnic minority groups are trapped in the nightmare of racial discrimination.

Is American democracy capable of nothing but keeping Americans calling for racial justice generation after generation? If people are truly the owner of the country, why are their wishes always so hard to be carried out?