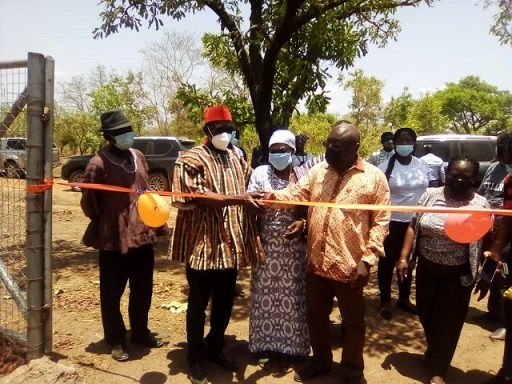 The construction of rangelands under the Sustainable Land and Water Management Project (SLWMP) in some selected districts in the Upper East Region is impacting positively on the education of children, Dr Kwaku Afriyie, the Minister of Environment, Science, Technology and Innovation (MESTI), has said.

The Minister said this when he officially commissioned and handed over 30 hectares of rangelands each to Kalaasa and Binaba communities in the Builsa South and Bawku West Districts respectively.

The fenced rangelands are rich in leguminous vegetation and have solar powered mechanized boreholes with drinking troughs installed.

Speaking at separate functions to commission the projects, Dr Afriyie said children of school going age no longer took their parents’ livestock out for grazing as they used to do, instead the animals were kept in the rangelands which allowed the children to attend school.

Dr Afriyie noted that apart from the nutrients, dense vegetation which had been restored, the projects also had drinking troughs in the rangelands to enable animals have enough feed and water to drink.

He said the project was intended to create grazing places for animals especially during farming seasons to prevent destruction of crops by animals which often create tension between farmers.

It would further provide water for animals to drink during the dry season which would contribute to improve livestock production, increase income levels of farmers and contribute to the achievement of the Sustainable Development Goals.

He said apart from scaling up the rangelands for many communities, the government would undertake validation exercise to ensure that the water from the solar powered mechanized boreholes could be used for dry season farming.

“I have noticed that the water yield here is very high and that this initiative can be applied in other sectors, where farmers could practice dry season vegetable production,” he added.

The projects are part of the implementation of the 10-year Sustainable Land and Water Management Project (SLWMP) designed to support the Government of Ghana to expand areas under sustainable land and water management in selected watersheds in some districts in Northern Ghana.

The SLWMP is funded by a Global Environment Facility (GEF) Grant under the auspices of the World Bank and being implemented by the Environmental Protection Agency (EPA), the Ministry of Food and Agriculture (MoFA) and the Forestry Commission among others.

The main objective of the Project which started in 2011 was to promote improved sustainable land and water management practices through Integrated Landscape Approach to support the reduction of land degradation through restoration and enhance the proliferation of biodiversity in selected micro-watersheds.

It is being implemented in 12 selected districts in the five regions of the North and eight gazetted forest reserves, established within the western wildlife corridor, as part of the project intervention.

Nab Akanjanga Akanfela, the Chief of Kanjagah, a community which shares a rangeland with Kalaasa community applauded government for the initiative and said it would prevent their livestock from traveling to far places in search of feed and water which sometimes lead to losses.

He said the project would not only enable their children to begin their academic ladder very early, but would help mitigate bush burning and deforestation which would go a long way to contribute to dealing with climate change issues.