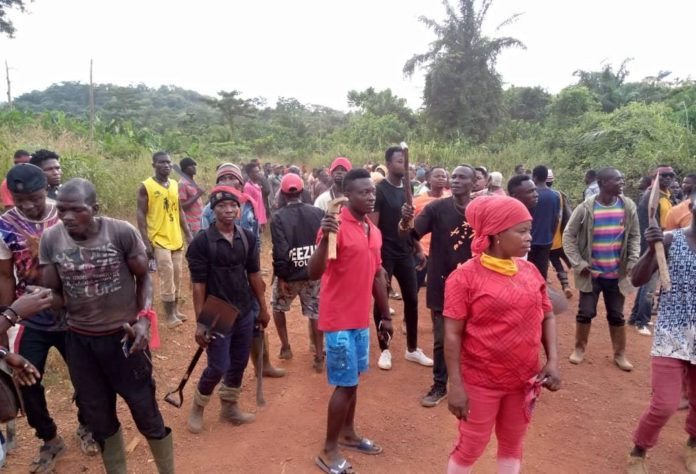 Members of the Small Scale Miners Association (SSMA) in the Bibiani-Anhwiaso-Bekwai Municipality have staged a demonstration to drive home their demand for community mining in the area.

They said the Management of Mensin Gold Mines Limited, the Assembly and traditional authorities had refused to allow members to engage in community mining in the area.

According to the Association, Mensin Gold Mines Limited use security personnel to prevent them from entry to their legitimate concession site for community mining, which is backed by the necessary documents.

The demonstrators, numbering more than a hundred, clad in red and black, holding placards, demanded that the authorities released their concession to them to enable them to engage in Community mining to cater for their families.

The leader of the group, Mr James Mensah who addressed journalists, said while the Municipality has resources the indigenes had been neglected and denied employment.

He pointed out that mining companies such as Chirano Gold Mines Limited, Ghana Bauxite Corporation and Mensin Gold Mines Limited were all based in the Municipality but have no significant impact in the lives of the youth in the area.

Mr Mensah explained that attempts were made to meet the Member of Parliament for the area, who doubles as the Regional Minister, Mr Kingsely Aboagye-Gyedu, the Paramount Chief of the Sefwi-Anhwaiso traditional area, Ogyeahoho Yaw Gyabi II and the management of Mensin Gold Mines for a peaceful coexistence but efforts proved futile.

Mr Dominic Afriyie, the convener, noted that community mining would provide funds to support the Assembly in community development projects.

According to him, the reason for their demonstration was the fact they were “hungry and could not sit aloof while foreigners enjoyed their resources.”

“We need legal mining concessions to work on to survive”, he pointed out.

“Our youth are starving, they have been arrested day in and day out for unlawful reasons. Money to buy food has become a problem for us, releasing the land for the community mining will prevent stealing and other social vices,” he said.

He, therefore, appealed to President Akuffo-Addo and stakeholders to permit them to do community mining.

Ogyeahoho Gyabi II, in response, called on the demonstrators to be calm and gave the assurance that their grievances would be addressed,

He said deliberations with the management of Mensin Gold Mines Limited were ongoing and that the company would soon start production which could create jobs for the unemployed.