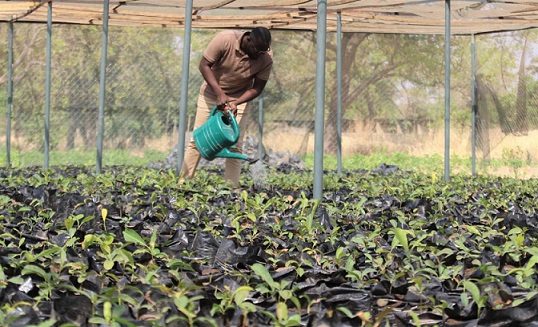 The two groups with support from students of some second cycle institutions, representatives from EPA, Kerenyiaman Cooperative Gold Prospecting Society Limited, and Forestry Commission planted 1,000 tree seedlings on the degraded portions of the Mine’s concession.

The theme for this year’s celebration was “Only One earth” and the national slogan was “Only one earth; Beat plastic pollution”.

Speaking at the function, Acting Director of Tarkwa Regional Office of EPA, Mr Prosper Yaw Nkrumah, observed that mining was an extractive industry associated with land degradation and water pollution.

He said, was the reason the EPA demanded mining companies to submit cost reclamation plans when they apply for environmental permits.

Mr Nkrumah explained that “while operations in the large-scale mining sector commited themselves to progressive reclamation of degraded areas and turning them into forest and setting up water treatment plants to treat their effluents or process water before discharging into the environment, the same could not be said for the small-scale mining sector. A situation which has been aggravated by the unscrupulous galamsey operations”.

He stated that time has come for the EPA to enforce Regulations, 1999 (L.I .1652) in the small-scale mining sector, adding, “the law provides that an undertaking in respect of which a reclamation plan is required to post reclamation bond based on approved workplan for reclamation”.

Mr Nkrumah added that the EPA as regulatory body did not only enforce compliance with environmental standards, but promoted responsible environmental behaviour, hence, the tree planting exercise demonstrate that when given the appropriate support and guidance, the small-scale miner would be able to restore the degraded lands.

He pointed out that the event was also in consonance with the Green Ghana programme and commended the Forestry Commission for providing the seedlings.
“The success of this event, l believe, will serve as a show piece for other small-scale miners within the Tarkwa-Nsuaem Municipality to emulate and create a clear distinction between regulated small-scale mining and illegal mining” Mr Nkrumah.

Touching on plastics that have saturated the environment and finding their way into the food chain and water bodies, the Acting Director stressed that it has been predicted that by 2050, there would be more plastics in the oceans than fish”.

He, therefore, appealed to Ghanaians to strive and change their everyday lives to aid in reducing the heavy burden of plastic pollution.

The Chief Executive Officer (CEO) of Kyerenyiaman Cooperative Gold Prospecting Society Limited, Mr Emmanuel Kobina Dadzie, emphasized that the government through Minerals Commission and the EPA had put in place strict measures to ensure the mining industry followed the requisite protocols and mining practice to protect the environment.

Malta Guinness champions sustainable use of plastics with partners

US$1.72 Billion needed for Refugees and Migrants From Venezuela

NEAR partners with Afropolitan