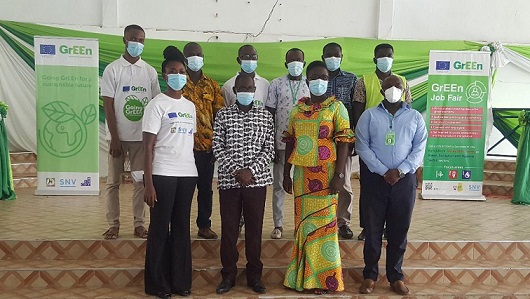 SNV Ghana, a Non-profit International Organization under the boosting Green Employment and Enterprise Opportunities (GrEEn) project has partnered with the Wassa Amenfi East Municipal Assembly to organize a job fair at Wassa Akropong.

The fair, which is tailored towards creating jobs for the youth and exposing them to favorable circumstances in the green sector, brought together employers, entrepreneurs, and job seekers to promote job opportunities, entrepreneurship, and innovation.

SNV Ghana is implementing the four-year joint project with the United Nations Capital Development Fund (UNCDF) with funding from the European Union Emergency Trust Fund for Africa (EUTF) and the Embassy of the Kingdom of The Netherlands.

Addressing participants at Wassa Akropong, Madam Dorcas Hammond, Skills Development Adviser, SNV Ghana said the project was being implemented in the Western and the Ashanti Regions, to address the root causes of irregular migration by supporting the sustainable and climate-resilient local economy, green and decent jobs as well as enterprises in Regions of departure, transit and return.

She stated that from the project, “we have realised that opportunities for employment creation in the green and circular economy exist”.

She said inadequate career counseling, guidance, and preparedness render many youths incapable of identifying and taking advantage of existing opportunities even at the District level.

Madam Hammond indicated that in this particular job fair, entrepreneurship in the green economy would be promoted through interactions with seasoned green entrepreneurs to inspire participants to start their green businesses.

Participants were furnished with green opportunities within Wassa Amenfi East Municipality to guide their career decision, she said.

She observed that the fair would also serve as a platform for preparing qualified skilled labour through employability sessions such as the writing of curriculum vitae, job description analysis, and cover letter.

She expressed her gratitude to all the exhibitors who showcased their products at the fair and other stakeholders for dedicating their time to be part of this success.

“The GrEEn job fair is one of the complimentary activities to the job creation efforts of the government of Ghana”, she further said.

According to her, from September 2020, two District level job fairs have been organized at Ahanta West and Nzema East Municipal Assemblies, added that employment information and opportunities have been made available to over 300 participants.

Madam Helena Appiah, Municipal Chief Executive (MCE) of Wassa Amenfi East Municipality, commended the organizers for the inclusion of her Assembly in the project.

She said the project would create more job opportunities in the Wassa Amenfi East Municipality and the youth would be employed to reduce the challenges of unemployment in the country.

Madam Appiah encouraged the youth to embrace the (GrEEn) project as it could aid them to become better persons in society.