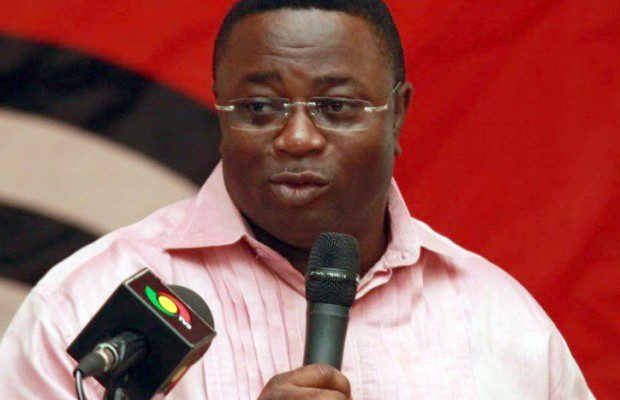 The minister?s name came up, in the heat of the World Cup fiasco, as allegedly having had sex with the actress a few weeks ago; but he rubbished the claims and described it as something beyond foolishness.

Hon Afriyie-Ankrah threatened legal action against the fabricators, who claim they had video evidence of the World Cup ambassador (Jackie) having sex with the former Sports Minister in Brazil.

He broke his silence on Metro TV four days after arrival from Brazil, stating that he never set eyes on Jackie throughout his stay in South America.

Hon Afriyie-Ankrah said, ?I have heard all kinds of stories and it?s incredible. The only time I went to the ambassadors? hotel, I went with two of my colleagues and it was the old footballers who were there. The female ambassadors and John Dumelo had gone to town.

?For the entire period we had been in Brazil till now, I have not set my eyes on these female ambassadors [Jackie and Becca]?not even once. I did not see them, not even once,? he said.

Explaining further, he said, ?I was with my wife and two kids in Brazil. So how could I disrespect her? Assuming she [wife] was not with me and hearing all these stories?though she believes in me but she is human. I did not set eyes on them [Jackie and Becca]?.

He revealed that he had never spoken to the actresses and that he did not have their numbers, wondering why some people would propound such falsehood to discredit him.

The former sports chief also jumped to the defence of Black Stars midfielder Agyeman Badu, who was accused of a sex scandal involving himself and songstress Becca.

To the Minister, the tight security at the team?s camp could not have allowed any ?foreigner? to get close to the team.

?Even me, I struggled at some point in time to get closer to the team. So how could Becca spend the night with Agyemang Badu in his hotel room while she doesn?t have an accreditation?? he asked.

Hon Afriyie-Ankrah was stripped off his post while on international duty following countless allegations with regard to Ghana?s participation at the 2014 World Cup.

Meanwhile, Rebecca Acheampong known on stage as Becca has reacted to rumours that she had sex with Ghana midfielder Agyemang Badu in Brazil for money.

The songstress was recently in Brazil as part of ambassadors selected by the Sports Ministry to rally support for the Black Stars and raise funds for supporters.

News platforms in the country were awash with reports that she had sex with one of the players, an allegation she vehemently denied.

Becca, in a statement, stated that the allegations and rumours were baseless and lacked merit and urged her fans to disregard attempts by some individuals to defame her.

?I have always worked hard to be where I am and have never traded sexual favors to advance in life or in my career,? the songstress stressed.

According to her, ?the closest I came to meeting the Ghana team was watching them from the stands at the stadium when Ghana played the United States.?

She noted that, ?It is against my very being and I feel saddened that people who ought to know better would without provocation peddle such palpable falsehoods about me thereby reducing me in the eyes of right thinking members of society.?

Becca said she has instructed her lawyers to take legal action ?against the people actively involved in tarnishing my image as a testimony to how serious I view the false allegations being leveled against me. I am ready to devote my time and resources to clear my name, as the damage done to my reputation, is immeasurable.?