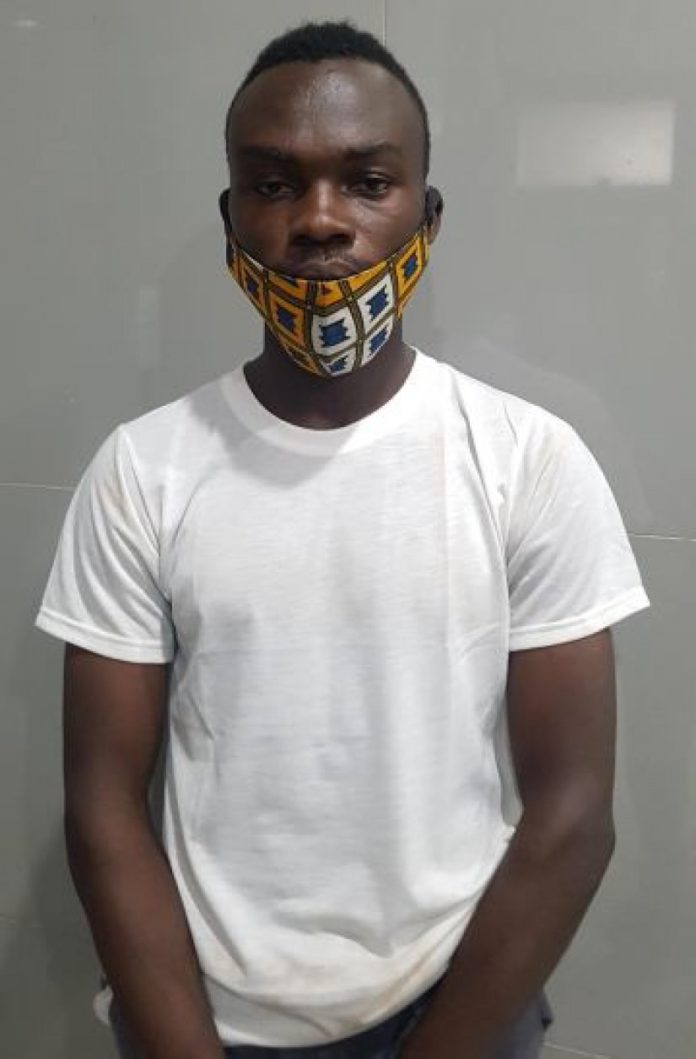 Bless Amedegbe, the man who instigated the public on social media to burn the house of President Nana Addo Dankwa Akufo-Addo and also kill police officers enforcing COVID-19 measures has been granted bail in the sum of GHC100,000, with two sureties.

An Accra Circuit Court ordered that one of the sureties must be a public servant earning not less than GHC1,000 cedis a month.

The 24 year-old security man, aka Don Dada Bless, is facing a charge of and assault on a public officer as well as False Communication, contrary to Section 76(1) of the Electronic Communication Act, 2008 (Act 775).

He has, however, denied the offences.

Amedegbe, is said to have taken the action because he believed the global pandemic was a hoax.

The Court presided over by Mr. Emmanuel M. Essandoh adjourning the matter to June 10, ordered that defence counsel be provided with the court’s earlier records.

Earlier, Mr. Yaw Dankwah counsel for Amedegbe prayed the court to admit his client to bail because he had a permanent place of abode and was in gainful employment.

Additionally, Mr. Dankwah held that Amedegbe had people of substance and high valued citizens who would stand as sureties for him.

According to him, the accused person would not disadvantage the prosecution by interfering with witnesses.

Mr. Dankwah said Amedegbe ought to be given the opportunity to have access to his counsel so he could prepare adequately for his defence.

The Prosecutor, Detective Sergeant Frederick Sarpong, did not object to bail but prayed the court to set out conditions that would compel the accused person to appear in court to stand trial.

At the previous sitting, Detective Sergeant Sarpong told the Court that the complainant was an operative of the Bureau of National Communication, National Security; whiles Amedegbe resided at Maamobi.

Sergeant Sarpong said in April this year, after the President announced the restriction of movement order in the Greater Accra and Greater Kumasi Metropolitan areas, Amedegbe took video shots of himself and circulated same via YouTube and WhatsApp Platforms, inciting the public to defy the President’s Executive Orders on the lockdown.

The Prosecution said the accused described the President’s social distancing directive as a result of the COVID-19 as ‘a hoax’, claiming the President was going to allow telecommunication companies to install 5G network, which would cause deaths.

According to the Prosecutor, he, consequently, incited the public to rise up against the President and set his house ablaze.

On May 12, this year, Amedegbe, who was being tracked, was arrested.

In his investigation caution statement, the Prosecution said, he admitted having made and circulated the misleading video on his WhatsApp and YouTube platforms.