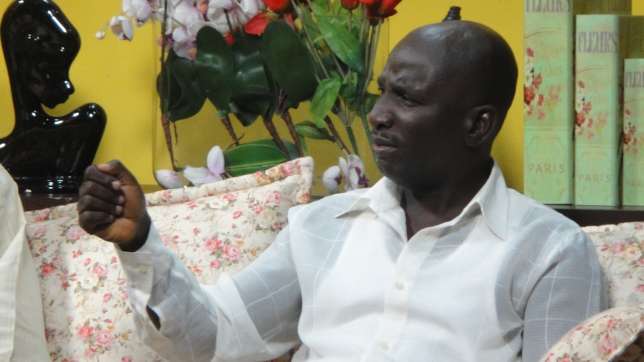 According to Socrates, all he did was to share his opinion on Tinny?s song because all he could here was ?badly played or spoilt accordion?.

Popular movie producer, Socrates Sarfo has replied to the accusations made by Tinny  that he(Socrates) hates him saying he does not hate him and he did not attack  as Tinny stated.

According to Socrates, all he did was to share his opinion on Tinny?s song because all he could hear in the song was the noise from a ?badly played or spoilt accordion?.

On the issue of him attacking Tinny and his family, he said, the artist had the chance to answer or not to answer all the questions he asked him but he chose to answer.

?I do not hate him. Tinny had the right to answer or refuse to answer all the questions I asked him but he chose to answer them the way he liked?, he told NEWS-ONE.

He added that, Tinny was rather the one who insulted him, telling to write down his questions before coming to the studio but he let it pass.

?He said I could hear only the accordion because I do not do music and even told me that next time I should write my questions before coming to the studio. He was the one who rather insulted me and got away with it. I can give birth to him so I allowed it to pass.?

Speaking on AdomFM, Socrates also added that, with Tinny?s experience in music, he was surprised the ?alestse? man accepted and paid for a song which was badly mixed and he is taking it to radio stations to promote it.