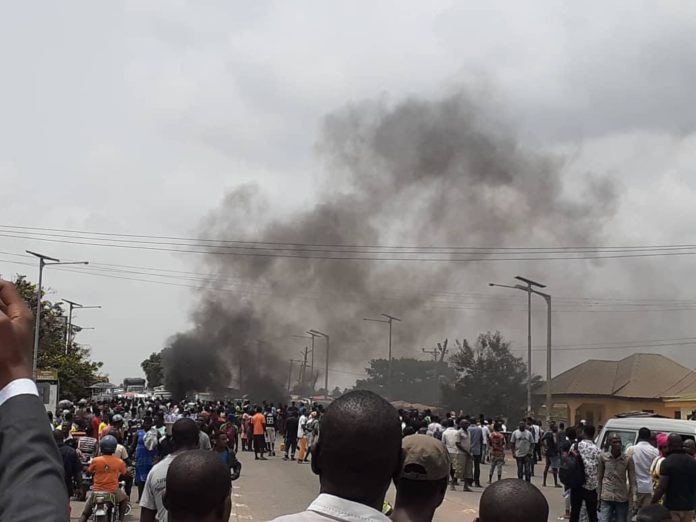 Some rioting youth in Sogakope in the South Tongu District of the Volta Region on Monday blocked the main Accra-Aflao road, burnt car tyres and attacked the District Police Station over the alleged murder of the Assemblyman of Sogakope South Electoral Area.

The youth, in protest of the incident, accusing the police of laxity, blocked the road, burnt tyres and later
besieged the District Police Station in an attempt to burn it down.

They burnt tyres in front of the Police Station and were mobilising to launch attack on the station when the
District Police Commander and a few police officers fired warning shots to disperse the crowd.

The youth retreated, but continued throwing stones into the yard and offices damaging the windscreen of
some vehicles.

An hour later, the military was called in to clear the road and help the police contain the situation.
One Agbeko, a key member of the group said they were attacking the police because “they are ineffective.

Murder cases and crime are increasing,” and demanded that the officers were transferred and also called for
the sack of the District Chief Executive for allegedly failing to ensure the security of the area.

He announced this when he, in the company of the District Chief Executive and some staff of the Regional
Coordinating Council and the Assembly commiserated with the family of the deceased.