A soil scientist has called for aggressive promotion of simple water harvesting techniques for all year round farming, to aid the success of the “Planting for food and jobs” programme. 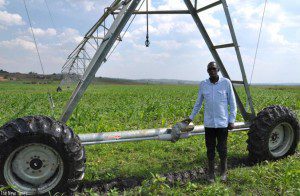 Dr. Francis Tetteh, Head of the Soil Research Institute’s (SRI) Analytical Services Laboratory, said this was the way forward, in the face of erratic and increasingly unpredictable rainfall pattern, resulting from the climate change.

He indicated that it was important, interventions were put in place to prevent crop losses and failure, he added.

Making the call through the Ghana News Agency (GNA) in Kumasi, he made reference to the “Asian Green Revolution” and said it became successful largely because of investment made – to store water for the farms.

Dr. Tetteh encouraged the government to prioritize irrigation and said this was vital for crop production, adding that, the emphasis should not only be on improved seeds and fertilizer supply.

He spoke of steps the SRI had taken towards developing crop specific fertilizers for the nation’s different agro-ecological zones.

The goal was to ensure the supply of the right quantity of nutrients suitable for particular crops.

He said the Institute had been working with the fertilizer companies on this and hinted that these would be piloted in the forest-savanna transition and savanna zones between now and June.

Dr. Tetteh said the pilot phase would involve about 2,000 farmers engaged in rice, maize and soya bean and cassava cultivation.

It would be extended to cover 100,000 farmers within the next four years, he added.
GNA/www.newsghana.com.gh