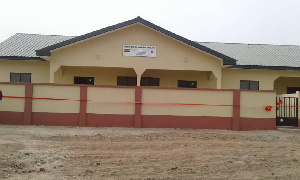 Residents of Sokpoe Traditional area in the Volta Region are mobilising to construct a Community Health and Planning Services (CHPS) compound.

Torgbe Kadzi Zogah Il, Paramount Chief of the area said the self-help facility would be situated at Dekporta to provide quality healthcare services to community members in that enclave.

He said it was important and the responsibility for community members to resort to some self-initiated development projects as they continued to appeal to government for other projects.

Torgbe Kadzi Zogah made the disclosure during this year’s 36th Tortsogbeza festival, which is celebrated annually by the people of Sokpoe in the South Tongu District of the Volta Region.

The project, he said when completed, would also bring healthcare services closer to the people of Dekporta and its surrounding communities.

Torgbe Zogah also called on all sons and daughters from the area to donate cheerfully towards the project for its timely execution and charged them people to eschew divisive tendencies and unite to develop the traditional area.

“Development goals cannot be achieved without peace and unity,” he added.

Mr Gati Emmanuel Kudzo, the Chief Executive of Gat Oil, who was the Guest of honour, commended residents for their self-help spirit and said it was necessary for citizens to be willing to embark on development projects to complement government’s efforts.

Mr Gati donated GHC 50,000 and bags of cement in support of the project.

Mr Kobby Mensah Woyome, Member of Parliament for South Tongu, commended them for preserving their rich culture and the unique festivals and called for innovative measures to develop the festival to become an attractive tourist attraction in the country.

This he said, could create employment opportunities for the teeming unemployed youth and generate revenue for the assembly.

Sokpoe ‘Tortsogbeza’ marks the crossing of the Volta River by the ancestors by canoe to their present location.

This year’s festival brought together all the 19 sub-chiefs and queen mothers including natives in the diaspora.