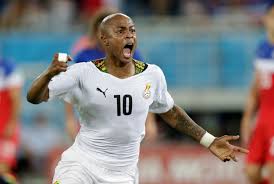 Andre Ayew’s uncle Solar Ayew says he is optimistic that the deputy Black Stars captain will emerge the 2015 African Player of the Year at the Glo-CAF Awards night to be held in Abuja- Nigeria tonight.

According to Solar Ayew, the “Ayew Family” has gone on their knees to ask for God’s favour for the Swansea City star and he is convinced that their prayer has been answered.

Though Ayew looks favourite in landing the award after helping Ghana claimed silver in last year’s Afcon Championship in Equatorial Guinea as well as putting up explosive performances for the Swans since joining in June 2015, other analysts believe that the Ivorian international stands a good chance of winning the award after leading the Elephants to clinched the Afcon trophy last year.

But a member of the Ayew Family, Solar Ayew has stated that they have asked for God’s favour which they believe will make Andre Ayew the winner on Thursday.

“We the Ayew Family have prayed over it and God willing on Thursday, the winner will be no other person than Andre Ayew.”

“Looking at what Andre has done in the year under review in Ghana football and on the continent in general, we the family thinks he deserves it so we hope that tomorrow our son will be crowned the king of African football,” Solar Ayew told Ashh FM in Kumasi.

“Per my personal analysis it will not be difficult for Andre to win the award because in the last edition of the Afcon, even though Ghana didn’t win but Andre’s impact in that tourney was better than Yaya Toure.”

“If we want to talk about the football that was displayed and leadership, Andre contributed more than Toure so we are hoping the coaches and the people that matters in football will look at that area to pick Andre.”