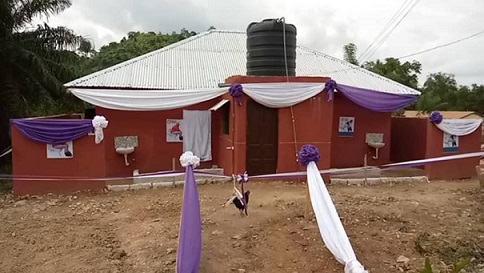 Ex. WO1 Robert Kwadwo Baidoo (Rtd), a native of Mbradan, has constructed and handed over a 16-seater water closet toilet for his people at Dunkwa-on-Offin in the Upper Denkyira East Municipality of the central region.

The 16-seater toilet facility has been divided into males and females.

Speaking at the ceremony, Ex. WO1 Baidoo said it was his desire to give back to society that propelled him to construct the facility for the people of the Area.

According to him, it will help end the long queues residents had to wait in to have their turn to nature’s call because of the inadequate toilet facilities in the town.

Nana Kwame Kumah II, Chief of Mbradan thanked Ex. WO1 Baidoo for the kind gesture and appealed to individuals and NGOs to support the community with development projects like market and good roads.

Meanwhile, some residents of Mbradan who were full of praise for their benefactor expressed joy for the gesture.