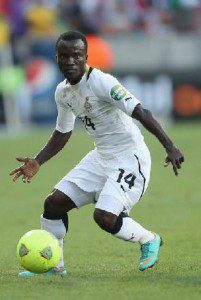 In-form Ghana winger, Solomon Asante, is targeting an African Champions League triumph this season, as he continues to flourish with his Democratic Republic of Congo side, TP Mazembe.

The pocket-size midfielder, recruited from Ghanaian club Berekum Chelsea, has fast become something of a cult hero.

His dribbling skills and frequent assists have seen him draw comparisons with African legends such as Jay Jay Okocha.

Although Asante is modest about those comparisons, he remains determined to win the African Champions league with the four-time continental kings this season.

?Things are going well here but my mission is to win the champions league with Mazembe,? he told BBC Sport.

?In the last two years, we have won the local league and reached the final of the Confederation Cup and also played the semi-final of the Champions? League last year.

?This year, we will do everything possible to win the Champions League. It?s been very competitive to win the cup in the last two years but the team now looks stronger with the new players that have been bought.?

Mazembe need at least a goalless draw in the return leg of their their last-16 clash against Malian side Stade Malien. The two sides drew 2-2 in the first leg in Bamako.

Yet Asante is convinced Mazembe, who are based in the mineral-rich Katanga province of DR Congo, will make it to the next round.

?We?re more complete now and I feel this is the right time to win the trophy again,? Asante maintained.

?Playing for Mazembe is so hard because of the high levels of competition in the team.

?Each time, you have to put in your best, because once there?s a dip in your performance, you are relegated to the bench. It?s not easy here ? we have very good players.?

While Asante sets out his current club goals, his eyes are also fixed on cementing a place in the Black Stars starting line up.

Despite having been offered to play for Burkina Faso in his younger days, the 25-year old instead chose his country of birth, Ghana.

With the Black Stars, he has been unable to nail a permanent place in the team, although he takes pride at having been part of the 2015 Africa Cup of Nations squad.

?I think I made the right decision to choose Ghana over Burkina Faso because since 2012, I have been in the national team. Football is all about taking your chances.?

?I know one day I will get my chance to play regularly in the national team.

?Ghana is such a competitive team with players playing all over Europe so for me to be part of the set up, it means I am doing very well.?

Asante remains determined to secure a regular team-place in his national team, and on the club scene, he also has ambitions for the future.

?Each and every player dreams of getting to the top and my aim is to play in Europe.

For now I am a Mazembe player but the rest is in the hands of my chairman Moise Katumbi,? he says.

?I am happy here but my aim this year is to win the champions league and thereafter, leaving will be easier because everyone will be happy with me.?