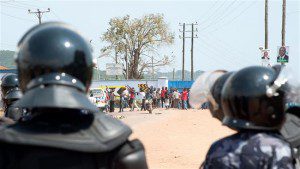 The Somali government has condemned Tuesday’s suicide attacks in the Ugandan capital Kampala in which six people were killed and 36 others injured.

The Ministry of Foreign Affairs and International Cooperation called on African countries to make a joint determination to stamp out terrorism that has claimed innocent lives in the region.

“Somalia calls on African countries to make an organized and deliberate effort to confront terrorism in thought and organization,” the ministry said in a statement issued on Wednesday evening.

The three blasts took place on Tuesday near a police station and on a street near the parliament building. The Islamic States (ISIS) reportedly claimed responsibility for the Tuesday attacks, saying three fighters set out with bags loaded with explosives.

The Ugandan police blamed the attacks on an Islamic rebel group, the Allied Democratic Forces (ADF) which is affiliated with ISIS.

Somali, which has been a victim of similar terrorist attacks, extended its condolences to the families of the victims and wished the wounded a speedy recovery. Enditem