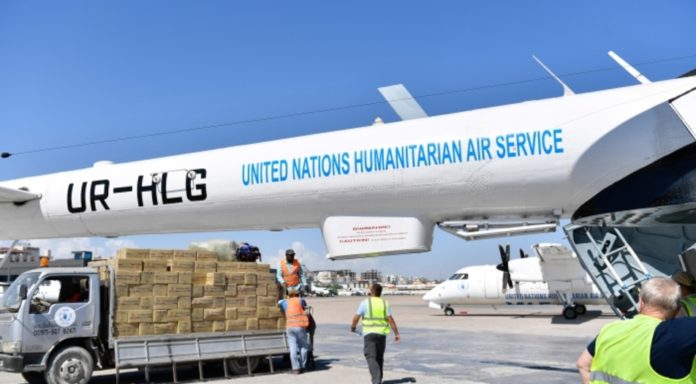 Somalia and the UN refugee agency have airlifted vital humanitarian assistance to some 8,100 flood victims in three regional states in the past week.

The UNHCR said the emergency kits that include jerry cans, soap, blankets, sleeping mats, kitchen sets and plastic sheets were airlifted to Baidoa, Bardheere and Qardho areas. Johann Siffointe, UNHCR’s representative in Somalia, said they are witnessing multiple emergencies in Somalia, with a rise of COVID-19, Gu flash floods and riverine flooding.

“These emergencies must be understood as mutually compounding, requiring ongoing strong cooperation between the international community and governments at the national and sub-national levels,” Siffointe said in a statement issued in Mogadishu.

According to the UN, the 2020 riverine flooding and flash floods caused by Gu season rains are giving every indication that they will adversely impact Somalia at similar levels to the Deyr rains of 2019 when more than 400,000 people were forcibly displaced.

The UN agency said the regions that have been hit hardest so far include Bari, Banadir, Hiraan, and Middle Shabelle.

“The current multiple emergencies are exacerbating the living conditions of Somalia’s 2.6 million internally displaced persons who are among the country’s most vulnerable groups,” UNHCR said.

During the first phase of the airlift, the government provided a cargo plane to deliver essential items from the UNHCR warehouses in Mogadishu to Garowe (destined for Qardho) and Bardheere, while UNHCR airlifted the supplies to Baidoa.

The UNHCR said the second phase of the airlift will commence later this week and target 17,000 people in affected areas including Qardho, Bardheere, Beletweyn, and Berdale. The UN response to the latest flooding came amid the rising number of COVID-19 cases in Somalia which reached 835 on Tuesday.

The UN refugee agency said it is mobilizing additional resources for non-food items and emergency shelter to respond to the ongoing needs.

Somali forces foil terror attack on base in southern region

Politicians advised to support the poor and needy