The Republic of Somaliland today sent a letter to U.S. Secretary of State Rex Tillerson and U.S. Secretary of Homeland Security John Kelly to request an exemption for Somaliland residents from the January 27 U.S. Executive Order restricting entry into the United States by individuals from Somalia and six other nations. 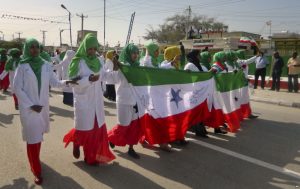 In the letter, Somaliland’s Foreign Minister Dr. Sa´ad Ali Shire urged the Secretaries of State and Homeland Security to take this action in light of the fact that Somaliland is an independent, democratic and stable nation that– unlike the nations affected by the Order – does not suffer from what the Order describes as “deteriorating conditions… [that] due to war, strife, disaster, and civil unrest increase the likelihood that terrorists will use any means possible to enter the United States.”

The letter also explains as the collapse of Somalia’s governing institutions and civil society dominated global attention and vast resources from the United States and other nations, Somaliland focused on building strong state institutions, maintaining peace within its borders and creating a sustainable economy. Having met the requirements for sovereign recognition, Somaliland functions as an independent government and nation, as well as a model for others. Unlike the nations subject to the suspension imposed by the recent Executive Order, Somaliland has full control over its territory and has not experienced the emergence of terrorist organizations. In fact, no acts of terrorism have occurred in Somaliland since October 2008.

In contrast, the U.S. Department of Homeland Security’s National Consortium for the Study of Terrorism and Responses to Terrorism has collected data indicating that Somalia has endured no fewer than one hundred terrorist attacks each year over the same period, and a significant increase in these numbers in recent years.

The letter notes that despite Somaliland’s accomplishments, “As a result of the January 27 Executive Order, Somaliland residents may not travel to the United States to visit family, pursue educational advancement or strengthen commercial ties between our two nations.” The letter also states that, “The mutual benefits realized through these contacts are immeasurable, and contribute both to our nation’s continued vitality and its ability to serve as a reliable partner to the United States in a challenging region.”

The Foreign Minister’s letter appeals for the U.S. Government’s favorable consideration of this exemption, which would “not only relieve Somalilanders of the unintended and undue burdens caused by the Executive Order, but also acknowledge – for Somaliland and others in the region and the world – that strong and responsible governance provides a foundation upon which America’s partners can secure progress for their citizens and contribute to shared international objectives.”

Who is responsible for American democracy disorder?