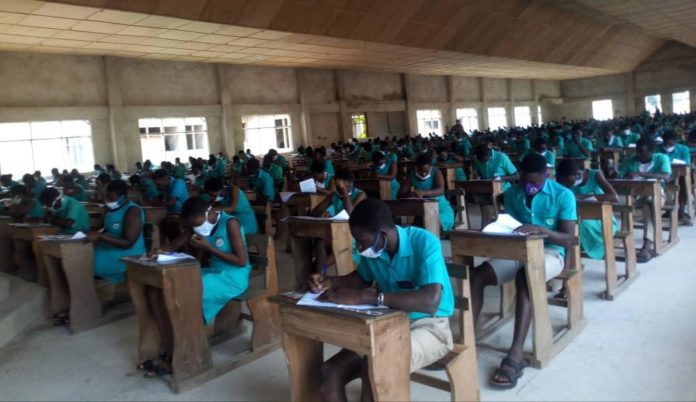 Twenty-nine registered candidates in the ongoing West African Secondary School Certificate Examination (WASSCE) in the Ketu South Municipality have absented themselves from the integrated science, their first core paper.

Out of the figure, ten were from Three-Town SHS, nine from Some SHS, while KLISTECH registered seven absentees and SPACO, three.

Some SHS and KLISTECH however, saw a further increase in the number of absentees as twelve and eight students respectively failed to show up during the second paper in the afternoon, Mr. Charles Elikplim Dorkenoo, Municipal Public Relations Officer (PRO) of the Ketu South Education Office disclosed to the Ghana News Agency (GNA).

Madam Margaret Aku Adzayawo, Headmistress of Three-Town SHS, explaining the reason for the absentees, said that all ten absentees of the total registered candidates of 384 that the school presented for this year’s WASSCE “are day students who didn’t return to school since we reopened about six weeks ago.”

The Headmistress said she made attempts to reach out to their parents and guardians to ensure they were available at the start of the WASSCE and expressed hope that they would be around to write the subsequent papers, saying, “we’re expecting excellent results from our students because we prepared them well for this examination”.

Mr Moise Fiatui, Headmaster, Some SHS, also said the nine students who did not sit for the morning paper were day students who failed to join their colleagues during the partial reopening of schools by the government and noted he could only hope that they would be available for the remaining papers.

Mr Augustine Dziwornu Amedeker, Headmaster of SPACO, said of the three absentees, “one of them is deceased and the other two are suffering ill health.”

The Municipality presented 1,572 candidates from all four public SHSs and 17 each from the two private ones, Amazing Love SHS and St. James Business College making a total of 1,606 for the 2020 WASSCE.

GES to distribute laptops to teachers