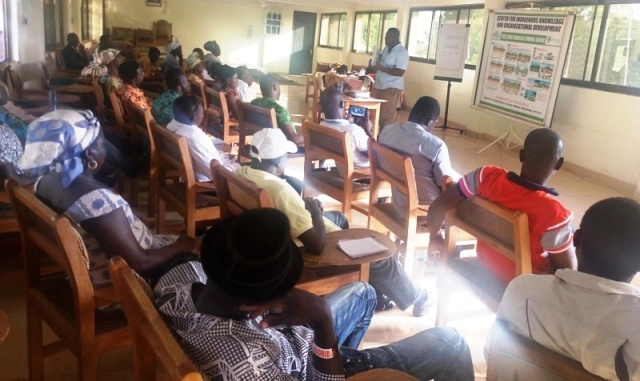 The Somé Traditional Council has organised a three-day capacity building workshop for selected schools within the area to improve results in the Basic Education Certificate Examination (BECE).

The workshop dubbed: Someé Traditional Area School Performance Improvement Project (STASPIP) saw the selection of a head teacher, an English teacher, a Mathematics teacher, a Science teacher and a representative of School Management Committee/Parent-Teacher Association from each of the nine beneficiary schools as participants.

Mr Emmanuel Kwashie Keteku, Chief Course Facilitator, touching on the purpose of the workshop during the opening ceremony, said the Traditional Council saw the need for change in education in the area, especially after realising that most public schools in the area, were consistently performing below the municipal average.

He said the current education strategic plan aimed to achieve three things; produce people for further education, the world of work and for life-long learning and that if schools in the area were failing to meet these, it was right that actions were taken to make things right.

“If education in this traditional area is not what it is, we’ll be importing engineers, doctors, teachers and nurses. Why don’t we produce them ourselves? If our education is in the right place, we’ll produce these people who will come home and we call them sons/daughters of the soil. So if our schools cannot give us our doctors, our engineers, our teachers, then what are we doing? So the Council decided to intervene,” the former Volta Regional Education Director said.

Torgbui Adamah III, the Paramount Chief of Somé, in a remark, said the Traditional Council had been nursing the idea of such an intervention for some years following the poor performance of schools in the area, saying of the three traditional areas in Ketu South, Somé was coming last.

He regretted the delay in rolling out the intervention blaming it on chieftaincy issues he had to deal with during his seven years reign as the Paramount Chief and expressed immense gratitude to Torgbui Gbadago VI, leader of Domefiawo of Somé whose efforts quickened the realisation of the project.

Torgbui Adamah charged participants to put the new skills being acquired into practice to benefit the children and hoped that all schools in the area would become beneficiaries in future to improve academic performance of the schools.

He urged the Municipal Education Directorate to move away from “rigid direction of education” and partner with chiefs to ensure the best in education delivery.

Mr Francis Steele, Ketu South Municipal Director of Education, through his representative, Madam Rejoice Kporku, lauded the initiative by the Council to build the capacity of teachers as a key solution to improving performance in the schools.

“It’s true that the ingredients to delivering good academic results are many and varied. In the midst of all these lies the teacher factor. The role of the teacher (facilitator) is key. That is why this initiative by Torgbuiwo couldn’t have come at a better time.”

Mr Wonder Dugah, participant and head teacher of St Paul’s Anglican Basic School, Agbozume who called on colleagues to actively participate in the workshop, said, “the programme has been very impactful and broadened my horizon of interpretation, critical analysis especially in areas related but not limited to critical thinking, system thinking and school performance improvement plan.”

ECOWAS mobilizes to improve the implementation of Arms Trade Treaty

Acting Vodafone CEO Concerned About Its Performance in Europe