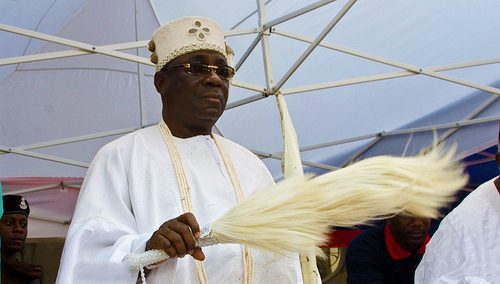 Recent inciting state?ments by some ?elderly? Nige?rians have heightened fears that unless such individuals are called to order, the nation may be up in flames anytime soon, thus fulfilling the pre?dictions of doomsday proph?ets.

Firing the first shot was Oba of Lagos, Oba Rilwan Akiolu I, who on Sunday, threatened to make life un?bearable for Igbos in Lagos should they vote against Akinwunmi Ambode, the All Progressives Congress (APC) candidate for Lagos State in tomorrow?s election.

Three days after that threat by Oba Akiolu, former defence minister, General Theophilus Danjuma, joined the fray. While playing host to President Goodluck Jona?than in his Asokoro, Abuja residence on Wednesday, Danjuma heaped blames on revered Igbo leader, the late Chukwuemeka Odimegwu-Ojukwu, over the death of millions of Igbos during the Nigeria-Biafra civil war.

Danjuma said if Ojukwu had, like President Jona?than, conceded defeat after federal troops seized the then Biafran capital, Enugu, dur?ing the civil war, the nation would have been saved a full year of bloodshed.

By that comment, the former defence minister ab?solved the Hausa-Fulani mili?tary top brass and their mon?archs of culpability in the pogrom that resulted in the death of thousands of Igbos in the North between 1966 and 1967; the reneging on the Aburi Accord by the then military Head of State, Gen?eral Yakubu Gowon, which eventually forced Ojukwu to lead Igbos to secede from Ni?geria and the genocide that followed, among others.

Aside these two state?ments, evidence abounds of other inciting comments by several other elderly Nigeri?ans, making many to wonder if these individuals really wish Nigeria well.

Those who have the ears of these elderly Nigerians and other trouble shooters should prevail on them to allow Ni?gerians live in peace.

Population Is Not The Same As Soccer – Football Administrator Fires Nigerians

Nigeria and Nigerians are apart

Do You Really Need a Mentor? Here’s What Nick Ayala Thinks