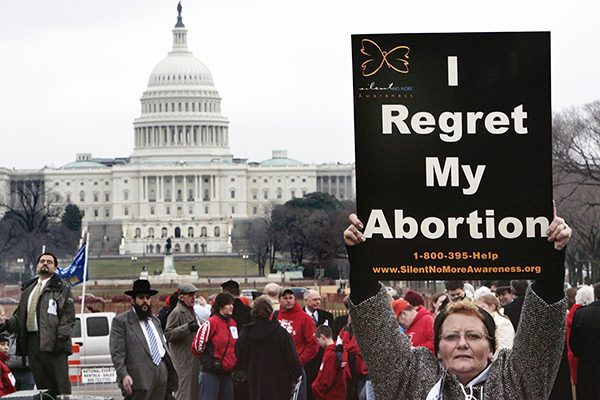 Chances are, you know someone who has had an abortion. Statistically, it?s a near-certainty: In the U.S.,?one in three?women will have an abortion by the age of 45. But despite how incredibly common abortion is, it remains mired in stigma and misinformation. Much of what we may think we know about this subject is actually outright lies told by abortion opponents to dissuade women out of seeking safe and legal abortion care.

Crisis Pregnancy Centers?(CPCs), which are?fake clinics?run by opponents of abortion, are well-known for lying to clients in order to convince them not to seek abortion care. But the lies told within the walls of CPCs aren?t just contained there; they are part and parcel of the anti-abortion movement in the U.S. For a movement that so fervently claims that ?truth is on our side,? they seem perfectly willing to proliferate blatant lies about abortion. Here are a select few of the most common and pervasive of those lies.

This lie about abortion is one of the most widely circulated. It?s commonly cited by abortion opponents and CPC employees as a means of scaring patients out of choosing abortion. Unfortunately for them, the link between abortion and breast cancer simply isn?t corroborated by any current, reliable medical evidence. In 2003, the?National Cancer Institute?conducted a workshop with more than 100 of the world?s leading experts on pregnancy and breast cancer risk, and they found that ?induced abortion is?not?linked to an increase in breast cancer risk.? This was corroborated by a 2009 study by the?American College of Obstetricians and Gynecologists, which demonstrated that recent, rigorous, methodologically-sound studies display ?no causal relationship between induced abortion and a subsequent increase in breast cancer.?

This lie is a staple of CPCs to try and dissuade women from undergoing abortions. Just like the lie about abortion and breast cancer, this fear-mongering doesn?t have any legitimate medical basis, either. According to the?Mayo Clinic, ?abortion isn?t thought to cause fertility issues or complications in subsequent pregnancies.? What?s more, the?Guttmacher Institute, a nonpartisan organization dedicated to advancing sexual and reproductive health and rights, found that abortions performed in the first trimester ?pose virtually no long-term risk? of infertility.

3. ?Most women regret having an abortion.?

Statistically speaking, some women will regret having an abortion. But the fact is, the vast majority don?t cite regret as their main emotion after an abortion; it?s relief.?A recent study?at the University of California, San Francisco found that 90 percent of women who were able to obtain an abortion reported that they were relieved and those who did cite negative emotions after their abortion didn?t indicate that they felt they had made the wrong choice. In that study, 80 percent of women who experienced mostly negative emotions still felt that abortion was the right choice for them. This anti-abortion talking point is deceitful and reductive, and it doesn?t allow for women to share their nuanced, personal abortion experiences.

4. ?Once a woman sees an image of the fetus from an ultrasound, she won?t want to have an abortion.?

The logic behind this anti-abortion lie has helped fuel the wave of paternalistic and invasive?forced ultrasound?legislation in much of the U.S. Even though 23 states currently regulate the provision of ultrasound by abortion providers in some way, viewing an ultrasound doesn?t stop women from having an abortion. Not even close. According to?a recent study?featured in the Obstetrics and Gynecology Journal, of the 40 percent of women who chose to view their ultrasound, 98.4 percent still went through with their abortion. Mandated ultrasounds aren?t just onerous and intrusive; they?re also incredibly ineffective at preventing abortion.

5. ?Abortion is psychologically damaging to women.?

6. ?TRAP laws are really about making abortion safer for women.?

Targeted Regulation of Abortion Provider?(TRAP) laws have become incredibly popular legislatively in the last three years, with copycat legislation springing up in states from?Texas to Ohio. Examples include requiring abortion clinics to be Ambulatory Surgical Centers, requiring that all abortions performed past a certain point be done in a hospital, or requiring all abortion providers to have admitting privileges at a nearby hospital. On the surface, these sound like benevolent requirements, but in practice, they are completely medically unnecessary and serve only to shutter otherwise functional abortion providers, which is the entire point.

While abortion opponents claim that these laws simply make abortion care safer for patients, in reality they do no such thing. TRAP laws are designed to impose onerous and completely unnecessary requirements on abortion providers in order to achieve one goal: close down abortion clinics. So far, they?ve been remarkably successful. Since TRAP laws surfaced in 2010,?more than 50?safe abortion clinics have closed. For a movement that claims it wants to?prevent the next Kermit Gosnell?from performing illegal and unsafe abortions, TRAP laws all but ensure that safe clinics disappear and unsafe, illegal ones abound.

Anti-abortion protesters and CPC employees often say that abortion hurts women, that it harms them, that it is unsafe and even ?deadly.? Except that, of course, it?s not. It?s not deadly when it?s safe and legal. How safe is abortion? According the?Guttmacher Institute, the risk of death with abortion is 10 times lower than the risk of death from childbirth. Having an abortion is far safer than having a baby. What?s more, the?Guttmacher Institute?also notes that first trimester abortion is among ?the safest medical procedures? and carries less than 0.05 percent risk of major complications that could require hospital care, and the risk of death for an abortion at or before eight weeks is literally one in a million. The real risk of death comes when abortion is unsafe: In 2008,?47,000 deaths?from unsafe abortion were reported worldwide.

The danger to women?s health and lives isn?t safe, legal, accessible abortion. It?s those who are trying to end it.