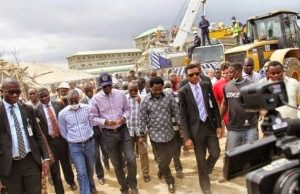 At the Friday November 21, 2014 sitting of the coroner?s inquest into the collapsed Synagogue, Church Of All Nations building, the court was told that the building materials used for the construction of the collapsed building were approved by the Standards Organization of Nigeria (SON).

This submission was made by the Director in charge of Inspectorate and Compliance at SON, Engineer Bede Obayi. According to him, iron rod samples taken for test at different laboratories showed that they were good and met the standard requirement. He raised reservations over the standard of the concrete debris, stating that the sample they took was slightly below the required density. However, he posited that the result could have been influenced by the pressure factor of the collapsed building, which makes it indeterminate in concluding if this contributed to the collapse.

Engineer Obayi also expressed surprise about the speed at which the building collapsed, fuelling speculations that the controlled demolition theory was indeed plausible. ?Candidly, I am surprised at the rate and speed the building collapsed. It?s quite unusual and I believe it should be investigated. I also admit that the result of the test conducted on the debris is suspect. Due to the technicality involved, our investigation is inconclusive. I was not involved in the observation neither did I participate in the conduct of the test. I don?t even know any of the people saddled with the responsibility of conducting the test. We went for test in three labs and the final reports indicated that most of the materials used in the Synagogue building met our standard requirements. All the sources used were also approved SON sources.?

Meanwhile, members of the public and other interested parties attending the hearing have voiced out their reservations about the biased manner in which the magistrate seems to be handling proceedings at the inquest. Some of them who spoke to the media on conditions of anonymity complained of the magistrate?s partial disposition. They observed that he was always visibly harsh on witnesses who gave evidence which seemed to support the controlled demolition theory. Others said his disposition was suggestive of a calculated attempt by the state to persecute a particular party, stressing that the inquest has lost its integrity

In another development, counsel to The SCOAN, Olalekan Ojo has filed an application challenging the jurisdiction of the magistrate for encroaching on matters beyond the scope of the inquest by inviting Prophet T.B. Joshua, who was not a witness to the incident. He said the primary scope of the inquest was to determine the cause of death and not pry into private matters that bear no consequence on it.

On his part, the magistrate, Oyetade Komolafe grudgingly granted the request of the counsel saying, ?I am not against Prophet T.B. Joshua and Lagos State is not against him. I will respect the law and await the report or verdict of the High Court. Therefore, I will hands off the issue of inviting him as a witness for now till the outcome from the High Court.?

However, he held up the letter submitted to the High Court challenging his jurisdiction and candidly stated, ?I can tell you that this letter will not get to anywhere. I count it dead already; it is not an issue.? The statement added credence to concerns voiced about his prejudicial handling of the inquest.