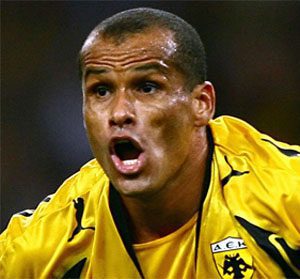 The son of Brazil great Rivaldo has signed a three-year deal with Dinamo Bucharest, the Romanian club said on Tuesday.

Rivaldinho was presented with Dinamo’s No. 9 shirt after passing a medical on Tuesday, Dinamo said on their official website.

The 21-year-old striker joins the club from Brazil’s Internacional for an undisclosed fee. He spent last season on loan with Brazilian Serie B side Paysandu, scoring just one goal in eight appearances.

Rivaldo is regarded as one of Brazil’s greatest ever players. He received the Golden Ball awarded to the best player in the world in 1999 and was a part of the Selecao team that won the 2002 World Cup in Japan and South Africa.

Bolsonaro’s security accused of violence against reporters at G20