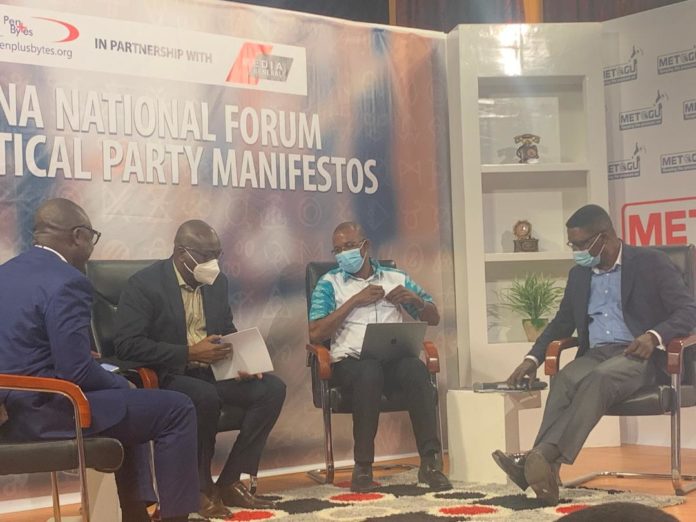 Panelists at the Ghana National Forum on Political Party Manifestos say the war against corruption in the country cannot be won not only through political manifestoes but by ensuring sound socialisation processes.

To them, the two major Political Parties, which had ruled the country for more than two decades had not been able to reduce the canker with programmes in their manifestos.

They were of the view that social institutions that traditionally had the responsibility of training the heart, head, and hand must inculcate values that would make corruption unattractive.

The day’s forum organised by Penplusbytes in partnership with Media General Group was used to discuss a study, titled, “An Assessment on the Winning Manifestos of the National Democratic Congress (2012) and the New Patriotic Party (2016).

The Ghana National Forum on Political Party Manifestos event was funded by the UK Aid and Strengthening Action Against Corruption-Ghana.

Professor Henry Kwesi Prempeh, the Executive Director of the Centre for Democratic Development said corruption was a bigger structural issue and needed to be tackled holistically.

He said manifestos promises were not enough to fight corruption, explaining that the process of contesting for political office needed to be re-examined.

“How does one get funding to campaign for political office. What about the voting mechanism, where delegates and electorates are given monies and items like television, refrigerators, clothes, and cooking utensils,? he asked.

“When they finally get into power, they award state scholarships to political party supporters, offer employment to party people and award contracts to cronies,” he added.

Prof. Prempeh said the political class had created a system where people who reported issues of corruption needed evidence to back their allegation.

“Our legal culture over the years have protected politicians and that has created room for corruption to be attractive. With a legal system like this, you can have 10 special prosecutors but corruption will thrive,’ he added.

He said the old form of reducing corruption, which involved ‘report, arrest, investigate and prosecute’, was not working anymore.

Dr Emmanuel Akwetey, the Executive Director of the Institute of Democratic Governance, said the cultural values of the country, including the popular, Ghanaian Hospitality where visitors were served food and water contributed to corruption.

He explained that when people gave out gifts, they expected favour in return, suggesting that those traditional practices needed to be relocked at the nation’s quest to fight corruption.

Dr Akwetey stated that the surest way of dealing with the canker was to comprehensively and strictly enforce laws, rules, and values.

Dr George Grandy, a Research Consultant at Penplusbytes, who shared portions of the study, said manifesto promises had become a reference point for the electorates, civil society groups and academia to hold duty bearers to the task.

He said the perception of corruption of an individual or political party played a crucial role in the electoral fortunes of any individual politician.

Dr Grandy said the study showed that political parties promised what was not measurable and used semantics to confuse the electorates on what had been delivered.

He asked politicians to take note that manifesto promises on corruption were no longer publicity documents to win elections and that electorates and civil society organisations were prepared to hold them to their promises.