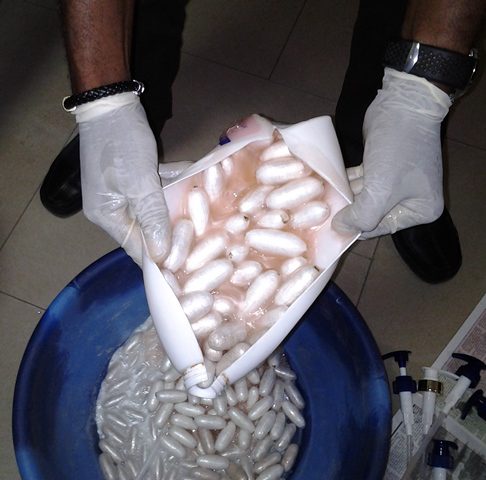 This emerged from the Russia-Africa Anti-drug Dialogue taking place in Durban, with the participation of delegations from several African countries. The dialogue was sanctioned by the South African cabinet last year, with the aim of strengthening and sustaining a consolidated position in countering the drug problem ahead of the forthcoming UN General Assembly Special Session to be held in New York next month.

South African Police Minister Nathi Nhleko said at the dialogue that no single country can combat the drug scourge alone.

“Everything possible has got to be done to save humankind against the scourge of drugs,” he said, adding, “We should actually rally all necessary sort of support across the globe.”

On the sidelines of the dialogue, South Africa and Russia signed a memorandum of understanding to cooperate in combating the drug trade and trafficking in Africa.

It was disclosed at the meeting that Africa is a major trafficking route of cocaine and heroin.
Victor Ivanov, head of the Russian Drug Control Service, said drug trafficking is endangering the stability of several African countries.

The drug trade, he said, is also linked to the upsurge of radical Islamic groups in Africa such as Boko Haram, Al-Shabaab, and other terror groups.

South African Acting National Commissioner Kgomotso Phahlane said that drug trafficking, as part of a wider international criminal network, has become a complex international problem that has had a negative impact on economic development, community integration and threatened the future of society in general.

It is for these purposes that BRICS member states have agreed on continued interaction at various government levels, including the use of specialized crime fighting agencies, to counteract illicit drug trafficking and to put a stop to the trade worldwide, Phahlane said.

South Africa, he said, has adopted a zero tolerance stance against illicit drugs and established the SA Narcotics Enforcement Bureau, which will embrace the back-to-basics approach towards law enforcement and crime fighting.

“Just as we have to unite within our respective countries, we must, as a global village, stand in unity to fight against common enemies, including those who poison the vulnerable with illicit substances,” said the commissioner. Enditem