South Korea’s former President Park Geun-hye has pleaded not guilty at her trial for corruption, the latest stage in her dramatic fall from grace.

In her first appearance in public since her arrest in March, she arrived at court handcuffed in a prison van.

The maximum sentence for corruption in South Korea is life.

Ms Park is accused of colluding with her friend, Choi Soon-sil, to extort money from some of South Korea’s biggest companies, including Samsung, in return for political favours.

Ms Choi Soon-sil, who is also facing charges, sat alongside Ms Park at the opening of the trial. She also denies wrongdoing.

As the trial opened in Seoul, the ex-president’s lawyers said there was “no reason for President Park to force companies to donate money which she was unable to use for herself”.

At the start of the trial which will determine whether she completes a transition from the presidential palace to a prison cell, Park Geun-hye was asked what her occupation was. She replied “unemployed”.

She now faces months of trying to persuade the judges that she didn’t pressure companies into giving millions of dollars to the life-long friend who sits alongside her in court number 417, the two separated only by a lawyer. They did not greet each with either a word or even a glance.

Ms Park wore a black suit rather than her prison garb. On her chest, worn like a broach: a badge with the number 503 – her prison number. She had a hairclip provided by the prison because her normal hairpins were taken away as potentially dangerous.

Ms Park is facing a total of 18 charges, with the charge sheet running to about 120,000 pages, South Korean media report.

Prosecutors say she allowed Ms Choi to use her presidential connections to pressure companies to give money to a foundation she established, earning them tens of millions of dollars.

In exchange, the companies would receive favourable treatment from the government, it is alleged. 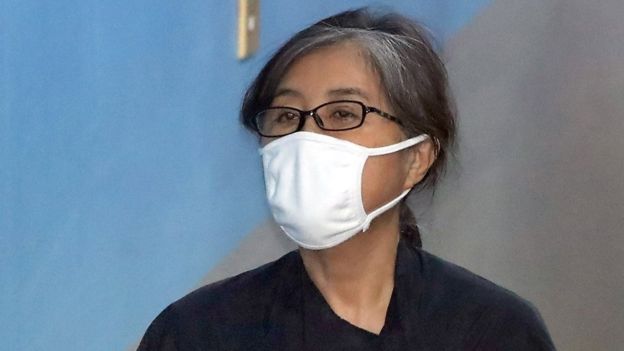 Ms Park is also accused of leaking state secrets by giving Ms Choi access to her work – including asking her to edit her speeches – and of running a blacklist of media figures who were to be barred from receiving state support because they had been critical of her government.

Ms Park is the third South Korean leader on trial for corruption but the first democratically elected one. 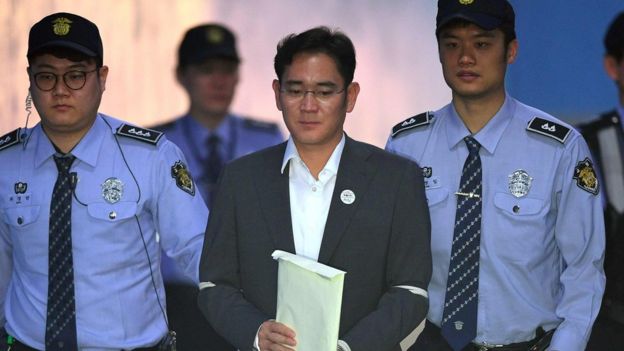 Dozens of people have now been investigated or arrested in connection with the scandal. All have maintained their innocence.

Ms Choi, who also denies wrongdoing, has been on trial since December, while her daughter, Chung Yoo-ra – alleged to have received help getting a university placement – was arrested in Denmark in January.

The acting head of Samsung Group, Lee Jae-Yong, and four other Samsung executive are on trial for allegedly giving bribes to Ms Park and Ms Choi in exchange for government support for a controversial merger.

Former health minister Moon Hyung-pyo and the chief investment officer of the National Pension Service (NPS) Hong Wan-seon are on trial for allegedly pressuring the NPS to accept the merger.

And last week, two plastic surgeons who treated the image-conscious former president – including one who injected her with human placenta extracts – were convicted of lying about having treated her.